About the butterfly pages

I started this guide to provide an up-to-date, accessible reference to the butterflies. The most recent Wisconsin butterfly field guide, The Butterflies of Wisconsin (1970), includes outdated distribution, life history, and phenology information, and is missing many species now known to be found in Wisconsin.

The other source for more recent distribution data is the original United States Geological Society (USGS) data, now maintained at butterfliesandmoths.org by the Big Sky Institute at the University of Montana and the Mountain Prairie Information Node/USGS. Data for their location maps was not updated at all for many years, and still is not as easily updated as taking data directly from sightings, as we do on this site.

When James Ebner wrote The Butterflies of Wisconsin (1970), he recorded 128 species. The Tiger Swallowtail, Banded Hairstreak, Pearl Crescent, and Eyed Brown have since been separated into two separate species, which brings that total to 132. He also listed 10 questionable species, of which 5 are now known to have been found here. This brings the total species that he covered to 137. On this site, I have listed 156 taxa representing 153 species. This is an increase of 16 in the number of species recorded in the 38 years since the publication of that book. Ten of the species not mentioned in his book were seen in 2006 or 2007.

The map below represents the number of species that have been recorded for each of the counties in the state. Initially I hypothesized it would show more species in the tension zone between northern and southern species. This is not the case, however; instead it shows where people have most collected and observed butterflies.

This is easily seen if you look at Chippewa (83) and Eau Claire (88) Counties, which have recorded a fair number of butterflies, but Clark (8), Buffalo (3), and Taylor (1), counties adjacent to Chippewa and Eau Claire Counties, appear to be butterfly deserts! Marinette County (93), Marathon (90), Waukesha (90), Juneau (89), Waushara (88), and Douglas (89) Counties are widely dispersed throughout state, so it seems likely that one would expect to find close to 90 species in most counties within the state, given enough time. (All numbers are historical sightings; newer statistics are starting to close the gaps.)

The most widespread butterfly, based upon the percentage of counties in which it was recorded, is the Great Spangled Fritillary, which was recorded in 54 of the 72 (75%) counties. A total of 24 butterflies were recorded from more than 40 out of the 72 counties. At first it would seem that larger, more easily observed butterflies would be recorded more often, but the Hobomok Skipper has been recorded from 45 counties, only two fewer counties than the Monarch. Likewise, the Tawny-edged Skipper, Long Dash, and the Dreamy Duskywing have been recorded from more than 40 counties each, which I think shows that, where people have collected and observed butterflies for long periods of time, they have been pretty thorough and have looked to document the diversity.

Counties with fewer species recorded often seem to have a larger percentage of strays. It seems plausible that people interested in butterflies recognize the unusualness of the stray species and record them, while ignoring the more common species. 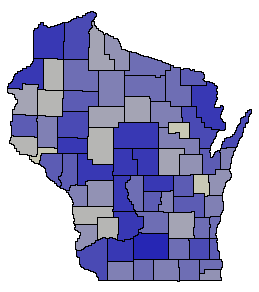