The Pipevine Swallowtail is an uncommon butterfly in Wisconsin. It feeds solely on Pipevines (Aristolochia sp.), none of which are native to Wisconsin. Records of this species in Wisconsin are mainly associated with plantings of Dutchmans Pipevine.

Two colonies of this species were found in 2001: one in Madison and the other in Milwaukee (Wisconsin Entomological Society newsletter, March 2002). On June 7, 2007, two Pipevine Swallowtails were seen in Madison laying eggs on Pipevine (Aristolochia tomentosa), and on June 8 one was observed in Necedah NWR. Three other reports were received in July 2007 from Madison, and in late July, caterpillars were observed feeding on Aristolochia macrophylla in Plover, WI. This plant had been established at this site for over thirty years without previously noticeable caterpillar damage to the leaves.

Above: black, with a strong blue-green iridescence, more pronounced in the male, and a row of white, submarginal spots on both wings. Below: very distinct submarginal row of orange spots, ringed with black, on an iridescent blue-green background.

Open areas near woodlands where the larval hostplants grow.

Two generations; late May/June and then in July with adults flying through August.

Rare. A stray that most likely is associated with its larval host plants, Pipevines. This species overwinters as a chrysalis, and it is likely that in most years cannot survive the winters in Wisconsin. In Ebner’s Butterflies of Wisconsin, he notes that there was a colony near Oostburg that “was known to flourish for many years.” Evidently this butterfly can survive some Wisconsin winters.

In the Summer 2001 issue of American Butterflies, an article called “The Pipe-dream Project” suggests that planting pipevines could help in increasing the distribution and abundance of this species, in a similar manner in which Bluebird houses have aided that species. Since the host plants do not grow here naturally, plantings of acceptable cultivated varieties of pipevines might be useful. 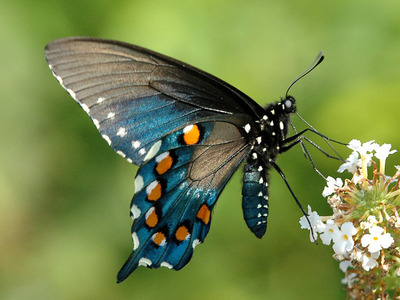 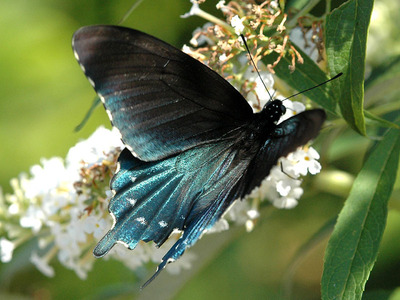 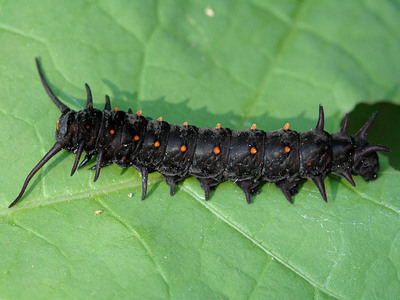 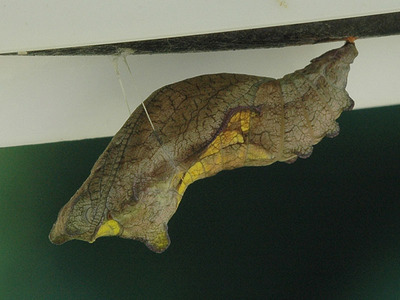 Chrysalis from the side 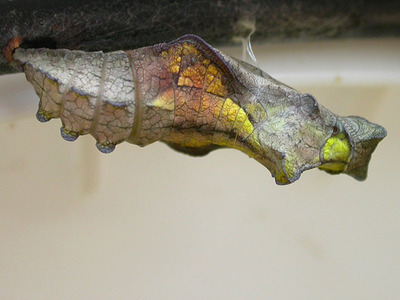