The Northern Pearly-eye is a woodland species that is rarely found in open areas. It has a swift, erratic flight that often ends with it perched, head down, aside a sunlit tree. While walking down a woodland trail in July, you can probably get acquainted with this species in any part of the state.

Above, this species is a brown butterfly with some lighter regions in the forewing and with fairly large brown circles surrounded by a lighter ring. Below, the wings are brownish tan with two dark, bold bands through both wings nearer the body, and the wings seem more scalloped than from above. The eyespots below are more detailed than from above, with the brown center surrounded by a yellow, a brown, and then a white ring. In addition, each of the hind wing eyespots have a small white dot in the center.

This is a woodland species and could be confused with the Appalachian Brown that may be flying with it. It is told from that species by the more scalloped wings, the wider bands through both wings, larger brown circles in the eyespots, and by the grayer coloration of the wing below. The Little Wood-Saytr is also flying at the same time, but is much smaller and is usually found flying, lazily, within a few feet of the ground.

Woodlands, woodland edges, and along streams.

One brood. This species may be found from late June to late August, but is most common in July.

The Northern Pearly-eye is fairly common throughout the state, but it is not likely that you will see more than 50 of this species in any day. 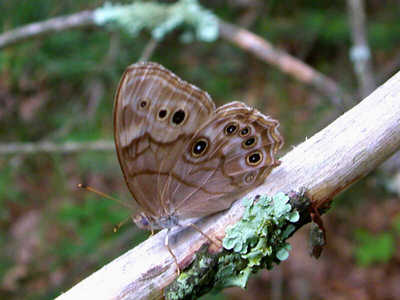 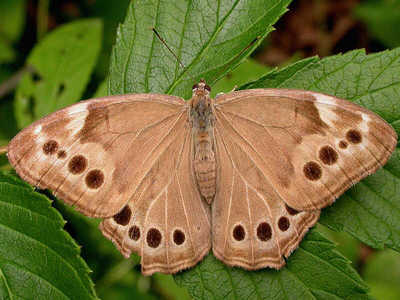 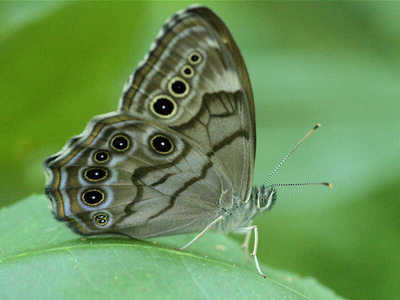