The Eyed Brown is a common species of wet meadows throughout the state. It is often seen lazily working its way through the tall grasses and sedges, rarely in a hurry or flying above the vegetation, even when disturbed. On a Trempealeau NABA count in 2002, we counted 74 of this species, but the number was limited only because the moist tall grasslands where it is found difficult to walk through, especially on a muggy, 90-degree day.

The Eyed Brown’s cousin the Appalachian Brown is very similar, but resides mainly in woodlands or woodland edges. Where a woodland trail does go near an open marshland, these two species can be found flying together and provide a lot of fun for the butterfly watcher to differentiate.

Above, the Eyed Brown is a brown butterfly with a lighter area toward the margin where the eyespots are located. The forewing eyespots are smaller and less prominent than the hindwing spots. As the butterfly ages and wears, it becomes increasingly lighter, so very worn individuals look almost white.

Below, this species has prominent dark eyespots, each with a light dot in the center and four yellow/brown rings around it. Not all the circles are complete, especially on the forewing. The postmedian lines on both the forewing and hindwing are very jagged, with a prominent pointed ‘V’. The post basal line is not usually smooth and has a jog at the second vein.

One brood. Flies from late June through August. Individuals found in August are usually very worn and much lighter. 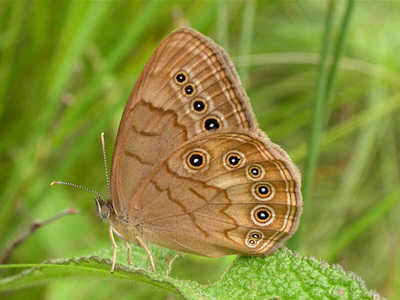 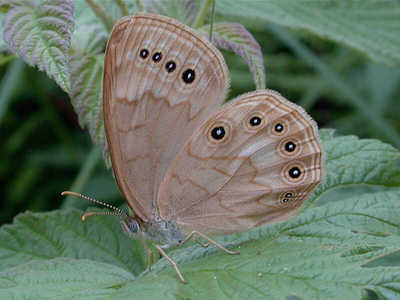 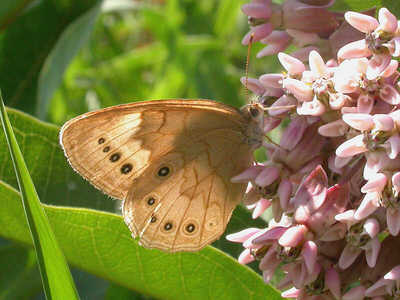