The Jutta Arctic appears to be the most widely distributed of all the bog species in Wisconsin. The images included here are the first individuals of this species I had seen. On the second year visiting Glocke Lake in Oconto County looking for bog species, I was pleased to find the Bog Fritillary, but I got very excited when I saw the Jutta Arctics slowly working their way through the brush at the edge of the floating sphagnum mat. I saw two individuals and chased them around for about 20 minutes before I was able to get these photos.

Below, the wings are mottled with various shades of brown and white. In the forewing there is a large brown area with a single eyespot, which may or not be visible. Above, normally not seen, is orange-brown with a lighter orange area that includes a variety of eyespots on both the forewing and hindwing.

The Chryxus Arctic does look somewhat similar, but flies in a very different habitat and these species are unlikely to be seen together. In addition the Jutta is larger, has the lighter areas above that include the eyespots, and does not have a median line on the forewing below with a pointed extension towards under the eyespot.

Seen from mid-May through mid-June.

This is a seldom-encountered species that is rarely seen in significant numbers. 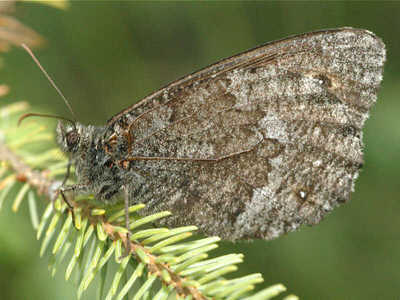 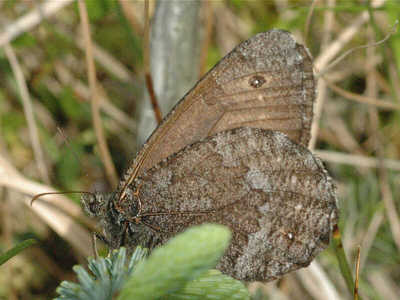