Juvenal’s Duskywing is a very common butterfly throughout Wisconsin. When I first became acquainted with this species, I watched males perch on the tips of dead shrubs or dried up forbs, and then regularly take an erratic flight up or down the trail, one to four feet above the ground, sometimes out of sight, but many times returning to nearly the same spot. Often some other butterfly was the distraction, but that appeared not to be necessary. Invariably, when I tried to get close for a photograph, they would take off but not land back on the same perch, until I went to their new perch, when they would return to their previous one! I have witnessed a similar behavior in a Wild Indigo Duskywing/Columbine Duskywing.

A black or dark-brown skipper with a row of postmedian white, translucent spots on the upper forewing. In the female these spots are larger and more conspicuous. In fresh males, there are usually only six of these spots. Partly this is because the male has many white hairs that may obscure the spots. In addition there is usually an additional spot in the middle of the forewing, just to the inside of the cell. This is fairly obvious in fresh individuals, and in some more worn individuals there appear to be two spots. The hindwing above has two rows of spots, again more obvious in the female, since long dark brown hairs obscure the spots in the male.

Below, the female’s spots on the forewing are larger and more obvious than the spots in the male. On the hindwing there are two large subapical spots that distinguish this species from all other Wisconsin Duskywings.

Mainly found in May and early June. This species is single brooded.

A fairly common Duskywing that is usually seen singly, except at wet, muddy sites where they may congregate in small numbers to obtain minerals. I have never seen more than 20 of these butterflies in one day. 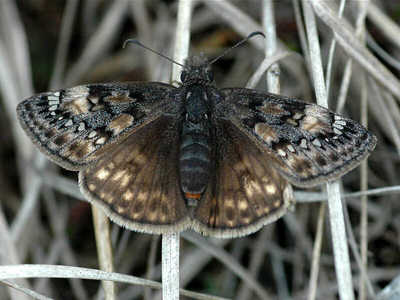 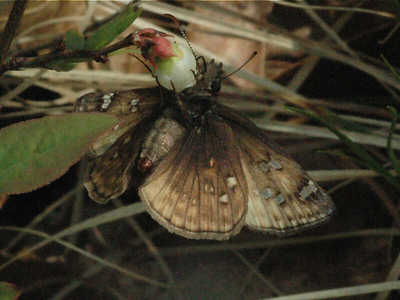 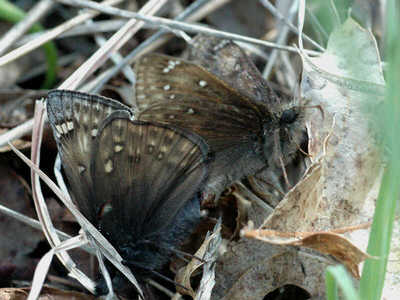 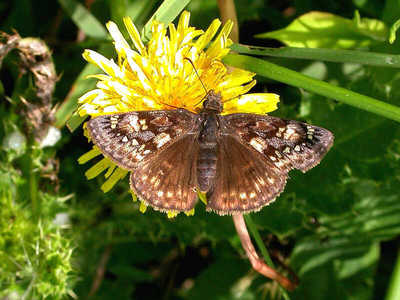 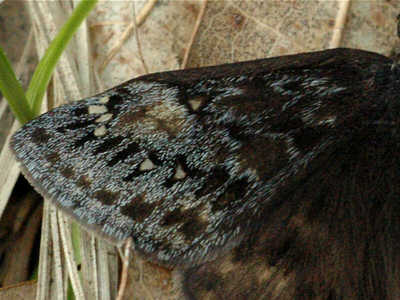 Detail of the male showing white hairs on the upper forewing