Many range maps, such as those given in Butterflies of North America (Brock & Kaufman) make it appear that this species is likely to be found in Wisconsin, with the map clearly showing the range as including more than a third of the state. Glassberg’s Butterflies through Binoculars: The East is perhaps a more accurate picture of the range for this species, as his range map does not include Wisconsin at all.

This species has been reported prior to 2000 from two southern counties, and could possibly be found elsewhere in the southern counties, but it is clear that this butterfly has not been seen with regularity in Wisconsin, and is not likely to be encountered.

However, it is most similar to the Juvenal’s Duskywing and because of the resemblance, may have been overlooked. Because Horace’s Duskywing is double brooded, it is more likely to be noticed in July or August, when the Juvenal’s is not flying, and when a Duskywing that looks like a Juvenal’s would undoubtedly be this species.

Very similar to Juvenal’s Duskywing in general appearance. The male is usually darker than the female, with smaller white spots, no white hairs throughout the forewing above, and palps that are often white. The female has much larger white spots, and has more of a contrast between light and dark areas. Below, both sexes are uniformly brown, with two rows of light spots near the wing margin.

Horace’s Duskywing is most likely to be confused with the Juvenal’s Duskywing in the spring and early summer, when they may be flying together. The key difference is that the Horace’s lacks the two apical white spots on the hindwing below. During the second brood, they are more likely to be confused with an Wild Indigo Duskywing or the Columbine Duskywing, either of which may be flying at the same time and habitat. These species are generally smaller than the Horace’s, and have a very dark inner third of their forewing above, which the Horace’s lacks.

Two broods. The first brood is present in May and early June with a second brood mainly in July.

Rarely seen in Wisconsin. Like the Juvenal’s Duskywing, it is not usually found in abundance, and it is more likely that a single individual would be seen. 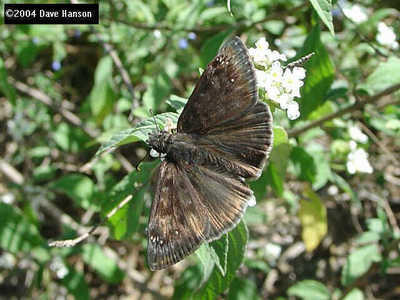 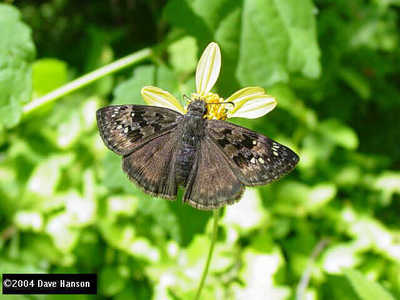 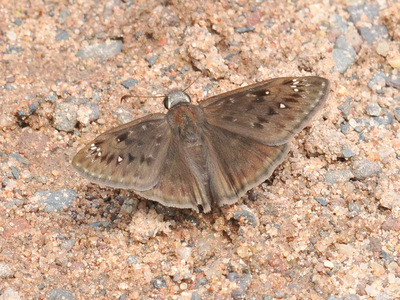