Historically, the host plants of the Indigo Duskywing in Wisconsin have probably been several species of Wild Indigo (Baptisia), Lupine (Lupinus), or other legumes. In the last thirty-some years the Wild Indigo Duskywing has also added the Crown Vetch (Coronilla varia) as a host plant, a species that has been planted along roadsides for erosion control, and this species has utilized these roadside corridors to increase its range throughout the east. A complication arises because in the western part of the state, along river bluffs especially, Wild Columbine may be present in the bluffs, while Crown Vetch adorns the roadside ditches below. So if you see a Duskywing, it becomes very difficult to say which species it may be based on the host plants. In addition, using the host plants may not be entirely accurate, since Wild Indigo Duskywing larvae have been raised on (Aquilegia) in the lab.

All Wild Indigo/Columbine Duskywings that I have seen and photographed have been in counties along the Mississippi River in Wisconsin, Iowa, and Wisconsin.

A dark brown skipper with four misaligned white, hyaline (translucent) spots on the forewing and a prominent lighter patch next to those. In The Butterflies of Canada, the authors note that there is usually is a distinct orange brown patch below the lighter patch. There are also several other white spots. This skipper is also noted as being darker in the inner half, and somewhat oily looking.

The Columbine Duskywing is certainly the most similar species in Wisconsin. The Columbine Duskywing (forewing length usually 13-15 mm) is smaller than the Wild Indigo Duskywing (forewing length usually 16-18 mm), but both are usually identified also by their distribution and association with the host plant. The Persius Duskywing is also very similar, but it has the four white, hyaline spots arranged in a straight row. Male Persius Duskywings also have white hairs scattered throughout the upper forewing which are lacking in the Wild Indigo Duskywing.

This species has two broods in Wisconsin, with the first brood occurring in late May through June and the second in July and into August. 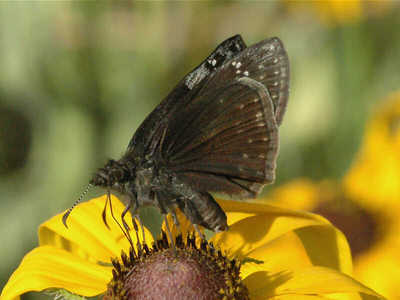 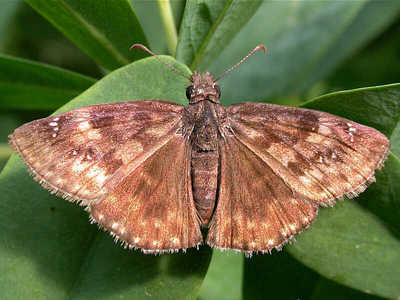 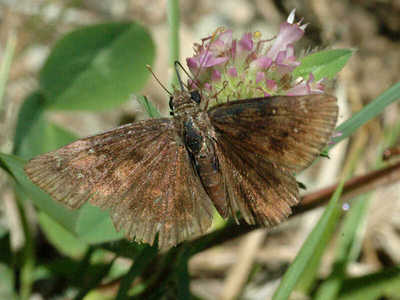 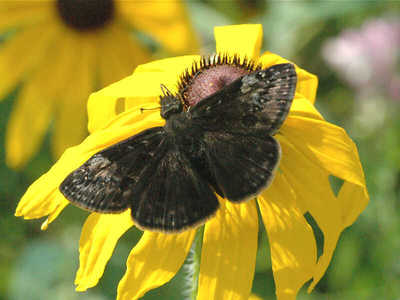