The Common Checkered-Skipper is a unique looking butterfly in Wisconsin. It is of interest that Ebner (Butterflies of Wisconsin) said that it “inhabits all of Wisconsin and is usually a common insect in its favored haunts.” Although it has been found throughout Wisconsin, this skipper is far from common in the northern two-thirds of the state. Before 2007, I had seen only one individual in over twenty years of observing. In an article on immigrant butterflies observed in Wisconsin from 1987 to 2001, Ann and Scott Swengel noted that they saw only eight individuals of this skipper, and that they had seen this species in only four of the fifteen years. Despite its name, it is not a common butterfly throughout Wisconsin.

Above, this skipper is blackish gray with a variety of white spots including a row of large rectangular checkers through both wings. Below, this species is lighter with larger white spots. The fringe in fresh specimens is very white.

This species is found in a variety of disturbed habitats, including roadsides, gardens, railroad rights-of-way, and farmyards where its host plants, mallows, are found.

There are two broods farther south, and this species migrates north occasionally and has been found in Wisconsin in June through October.

A rare stray in Wisconsin. 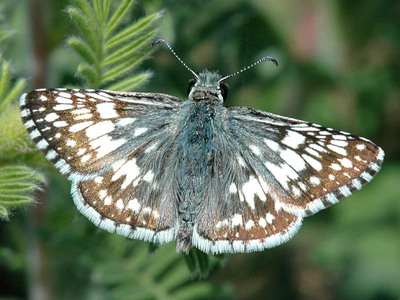 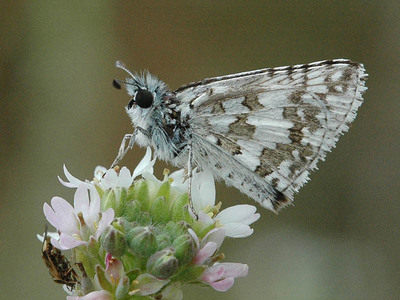