The Least Skipper is aptly named, as it is the smallest skipper in the state. This skipper is often seen flying very low through tall grasses adjacent to ponds, small lakes, rivers, or streams. It rarely gets higher than a couple feet above the ground as it slowly and somewhat choppily moves through vegetation. It does nectar on a variety of species, but because of its small size, it is more likely to be seen nectaring on much smaller flowers than the larger skippers.

A small orange and black skipper. Below, this skipper is a solid orange with somewhat lightened veins. Above, the Least Skipper is orange with a variable amount of black, sometimes even nearly all black, and without any spots.

Once you are familiar with this species it is somewhat easily identified based upon size and habitat alone. I have seen people misidentify a photo of a European Skipper as this species, because it also is an orange and black skipper, which often can be seen in large numbers, and flies low to the ground. The Least Skipper has a much wider black margin on the wings above, and below, this skipper is very orange with lightened veins, while the European Skipper has somewhat lightened wings without prominent veins.

Edges of streams, ponds, and lakes. This species is rarely found far from water, even when nectaring.

There are at least two generations per year, and possibly three, especially in the southern counties.

The Least Skipper may become fairly abundant; I once counted over 300 while walking less than a half mile on dikes at Poygan Marsh in Waushara County. 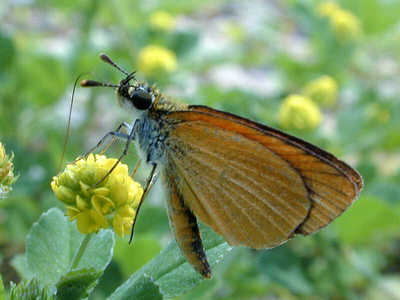 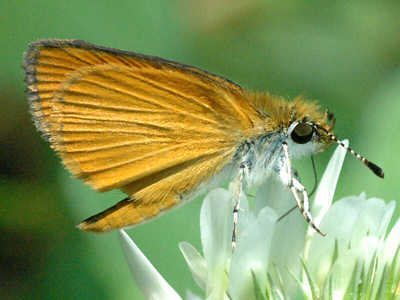 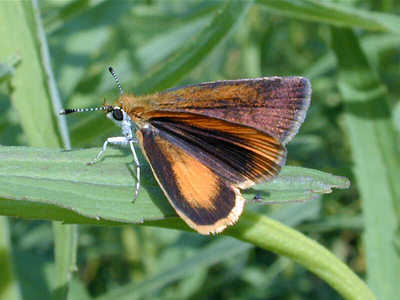 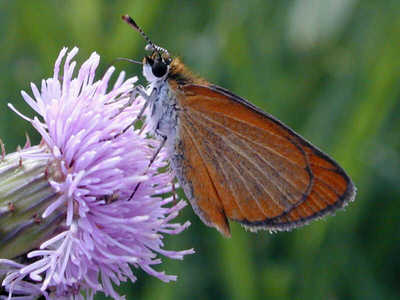