This species was introduced into Canada in 1910, and is now found throughout all the Great Lake states. In Wisconsin it can be found throughout most of the state except perhaps the westernmost counties, but it is likely that it will also increase its distribution to include these counties.

This species is most impressive for its occasional abundance, far greater than that of other skippers in the northern states. The record high for this species on a single North American Butterfly Association count is 55,340 and every year the highest count is well into the thousands. The host plant for this species is timothy, an introduced grass that is found throughout the state.

The European Skipper is orange with a very thin black margin, slightly darkened veins near the margins and a very thin, black stigma in the male. Below it is basically orange with various amounts of whitening throughout both the upper and the lower wings.

The Delaware Skipper is similar but slightly larger, with longer antennae, and has a wider black margin. The male Delaware Skipper also has an obvious black cell end bar and the female is even darker above. Below, it is completely orange/yellow with no whitening. The European Skipper is smaller than the Delaware, with very short antennae, a very thin black margin, only a very thin stigma on the male otherwise it has essentially no other markings above. Below, the European Skipper has a whitening unique to all Wisconsin skippers.

Old fields, roadsides, and open areas with timothy, the main host plant of this species.

This species is single brooded and flies from early June through late July.

This species is widespread throughout Wisconsin, but seems to occur in larger numbers in the northern part of the state. It can become very abundant. 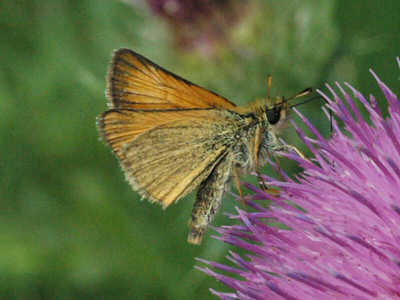 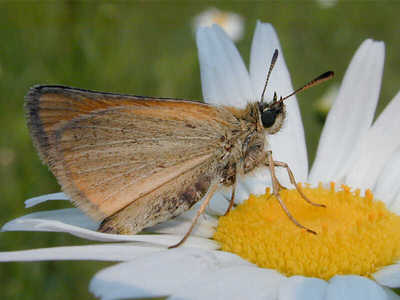 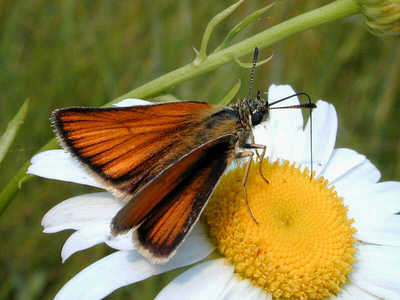 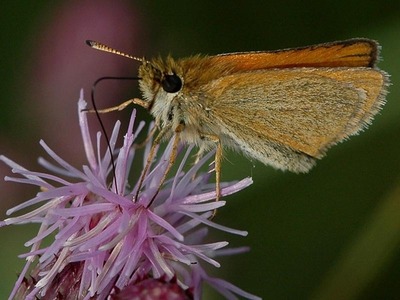 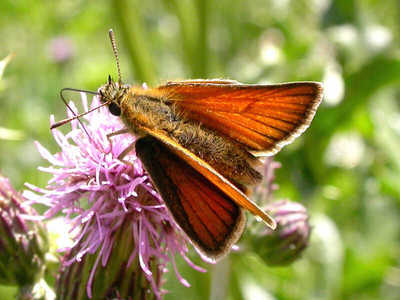