I made my first trip up north to search for this skipper in 2006. I could not find anyone who knew where or when to see this species, but that didn’t stop me from heading north in hopes of finding this late-season, northern species. I chose to check a site in Iron County, north of Mercer, and found the butterfly within minutes of parking my car. I later saw this species in all locations that I checked in Iron, Vilas, and Florence Counties, so it appears that this is a fairly common species in these northern counties.

Below, this skipper is a dull orange, with very distinct white spots. Above, the male is orange with a fairly wide black margin, and a prominent stigma. The female is darker, with a couple of lighter spots in the middle of the front wings.

The Leonard’s Skipper is very similar to this species; the upper wings of the male and female of these two species are nearly indistinguishable. Both skippers are late-season skippers and may be found together in some Wisconsin locations. Below, the Leonard’s Skipper has a reddish tinge to it, especially in very fresh individuals, while the Common Branded Skipper has a much lighter color, and even a somewhat greenish tinge.

Fields, open areas in woodlands, and roadsides in the northern counties.

This species is single-brooded. It may be seen from mid-July to late August.

Common in the northeastern counties in the state. 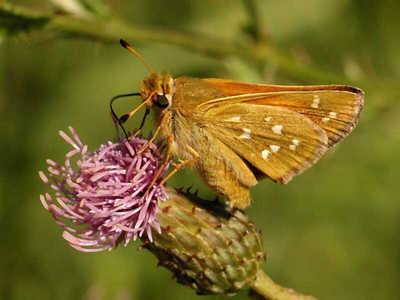 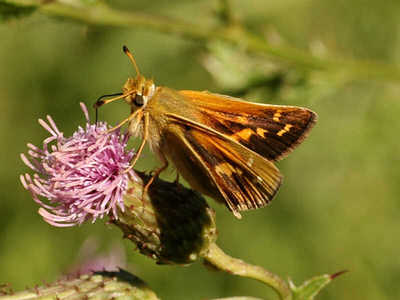 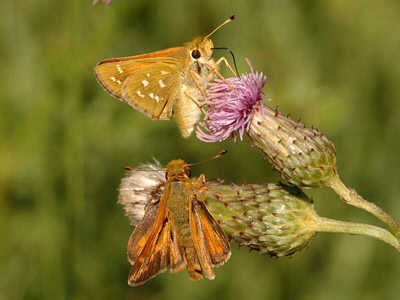 Male displaying for a female