This butterfly is only an occasional visitor to Wisconsin; I had not seen my first individual until 2006. Dave Hanson reported more than 30 of this species in Bayfield County in 2002, and was surprised to find out that it was uncommon, as he had also seen it the year before. In 2007 he reported both this skipper and the Fiery Skipper, the farthest north that this species has been reported in the United States. The Sachems were found at four separate locations in Bayfield County and so were widespread there, but were less common than the Fiery Skippers.

Above, the upper wing of the male is yellowish with a dark border and a very prominent rectangular shaped stigma. The female from above is also yellowish, with more black than the male, and two large light, transparent spots in the middle of the wing. Below, both the male and female are variable, but in general the female has an obvious spot band, that often looks very similar to the Indian Skipper or the Cobweb Skipper, and the color of the hindwing is somewhat pale rather than yellow. The male is yellowish, contrasting sharply with the female, and usually has a two-toned hindwing with a rather indistinct pattern that looks similar to the more unusual pattern of the Peck’s Skipper (second photo).

From above, the male Sachem cannot be mistaken for any other Wisconsin species. Because this species is not very common in Wisconsin and most likely would be seen later in the summer, the female from above could just be overlooked as a Leonard’s Skipper, but the large spots on the Sachem are much lighter and more transparent. From below, the female does not look like any other skipper that would be flying in late summer.

This is a skipper of backyard gardens, parks, and other open places.

This species cannot survive a winter in Wisconsin and so must immigrate into the state each year. It usually arrives later in the summer, but may have a second generation if it makes it here early enough.

A rare stray in Wisconsin. This species is not found every year. 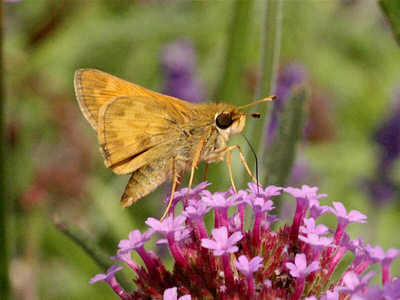 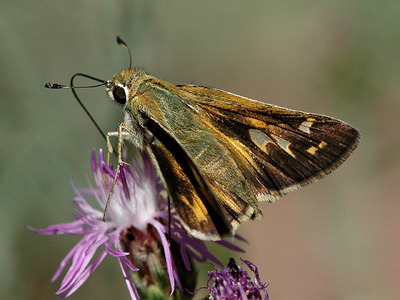 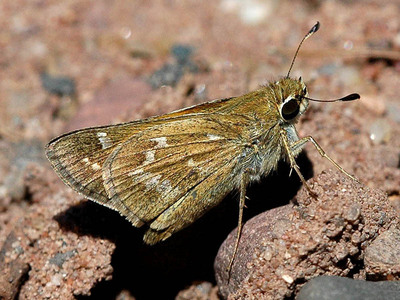 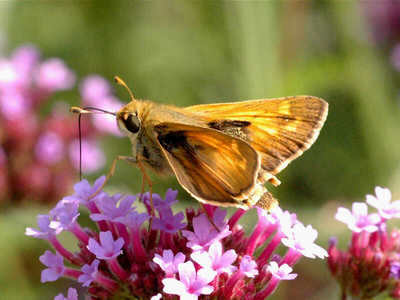