This skipper is one of my favorite little skippers in late June and early July. It certainly exemplifies why these insects are called skippers, since they are nearly impossible to follow as they fly quickly from one nectar source to another. You better have your binoculars ready for these skippers! This species should be expected in drier habitats, where it is often seen nectaring on various species of milkweed.

Above, this skipper is a very bright orange with black margins. The male has no stigma, but does have a black mark at the end of the cell. There is usually some darkening of the veins at least on the forewing. The female is much darker with a wider margin, darker veins, and additional black markings towards the body on the forewing. Below, the sexes are both unmarked yellowish orange, with the color definitely duller than the color of the wings above. The fringe is basically the same orange as the under wings.

The female Delaware Skipper is very similar to the male Byssus Skipper. In fact, the first photo I took of a male Byssus Skipper, I originally assumed was a Delaware Skipper female. It wasn’t until I had done some additional research about the Byssus Skipper, which I was attempting to photograph, that I noticed that it might not be a Delaware Skipper. After much research into the differences between the two, I did determine that my photos were of a Byssus male. Later I was questioned about this determination and I revisited my photos and research and asked the opinions of others more familiar with the Byssus than myself and have determined that the photo was indeed a Byssus Skipper male. The differences between the two from above are minimal. Looking at the photo on the bottom that compares the two from both above and from below, notice that the female Delaware has very darkened veins, a large dark mark near the body, and orange fringe, while the Byssus does not have darkened veins, it has few dark markings near the body, and has white fringe. These characteristics are somewhat variable, and not all specimens would have all three characteristics the same, thus it is important to try to see or photograph this skipper from below so that you can also use these characteristics to help in identification. The Delaware Skipper from below is very uniform in color with no markings and fringe that is orange and nearly the same color as the wings. The Byssus Skipper from below is much brighter, has obvious darkened margins, and has white fringe, which contrasts greatly with the wing color. The Byssus Skipper has been found only in the far southwestern part of Wisconsin so it is not likely to be an identification problem throughout most of Wisconsin, but it looks so much like the Delaware it may be that it has simply been overlooked.

This species has one brood that flies from late June through July.

The Delaware Skipper is usually found singly and well spaced throughout a field. I was amazed when I once saw five on the same milkweed plant. 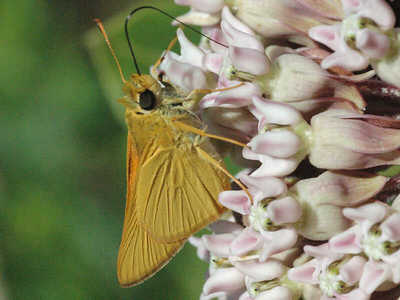 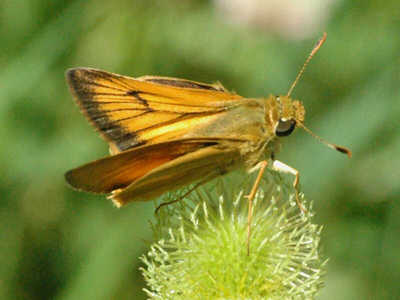 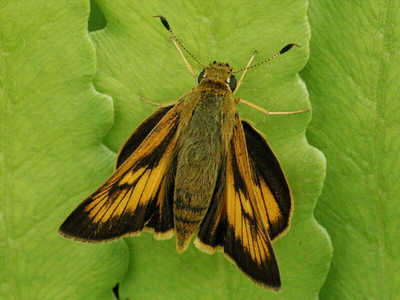 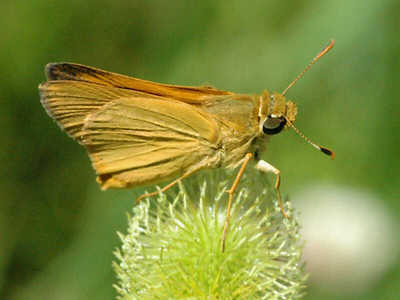 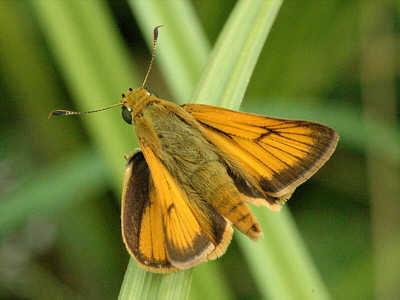 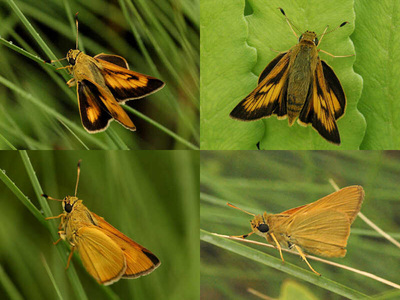 This photo compares the Byssus Skipper male, left photos, with Delaware Skippers, a female top right and an unknown gender Delaware Skipper bottom right. The photos from below and the photo on the top left were all taken on July 2, 2006 on the same hillside at Hardscrabble State Natural Area in Lafayette County.