The Byssus Skipper is a very difficult species to identify; I have spent more time studying this species than any other species of insect. Part of the difficulty is that the Byssus has a subspecies in the southeastern U.S. which is more common, has more written about, is easier to identify, and is more often pictured in books. The subspecies in Wisconsin is more variable, especially the males, which are sometimes nearly unmarked from below.

In the Field Guide to The Skipper Butterflies of Illinois (Bouseman, Sternburg, and Wiker, 2006), this species is said to be using more disturbed habitats, including roadsides and restored prairie, and is apparently becoming more common.

Below, the male of this species is variable, but ranges from a very bright yellowish-orange to a somewhat darker orange, with a darker margin, occasionally with an obvious lighter area in the middle of the hindwing, and a white fringe. The female from below is much darker, and often is nearly brown with a very obvious spot band in the hindwing with all the spots of nearly the same size and in a crescent.

Above, the male is yellowish-orange with black margins. The male has no stigma, but does have a black mark at the end of the cell. There usually is little darkening of the veins, and there are a few dark marks toward the body on the forewing. The female is nearly brown with a very distinct row of orange spots on the forewing.

The female Delaware Skipper is very similar to the male Byssus Skipper. The differences between the two from above are minimal. Looking at the last image comparing the two skippers, notice that the female Delaware has very darkened veins, a large dark mark near the body, and orange fringe, while the Byssus does not have darkened veins, has few dark markings near the body, and has white fringe. These characteristics are somewhat variable, and not all specimens would have all three characteristics, so it is important to try to see or photograph this skipper from below so that you can also use these characteristics to help in identification.

In 2007 I was able to take photos of many Delaware females and the two males pictured here. The amount of black near the body on the forewing above does appear to be a diagnostic characteristic. All female Delaware Skippers have much more black compared to the Byssus Skipper, and each one that I saw perching was easy to identify in the field based upon that characteristic.

From below, the Delaware Skipper is very uniform in color, with no markings and fringe that is orange and nearly the same color as the wings. The Byssus Skipper from below is much brighter, has obvious darkened margins, and has white fringe, which contrasts greatly with the wing color.

The Byssus Skipper has been found only in the far southwestern part of Wisconsin so it is not likely to be an identification problem throughout most of Wisconsin, but it looks so much like the Delaware it is possible that it has simply been overlooked.

The female Byssus is also very similar to the female Black Dash. The markings and coloration from above are nearly the same on these species, but the spot band below on the Black Dash has two middle spots that are more elongated than the others, while the Byssus Skipper female has spots that are nearly the same size. The seventh and eighth photos on this page are of a fairly worn individual, but without a good photo showing clearly that the spots are all similar, it cannot be identified with certainty. This individual was clearly larger than a Black Dash and was found on the dry hillside, a more likely habitat for the Byssus Skipper that has since been found there.

This species is single brooded and flies from late June through July.

Uncommon, even where it is found in far southwestern Wisconsin. 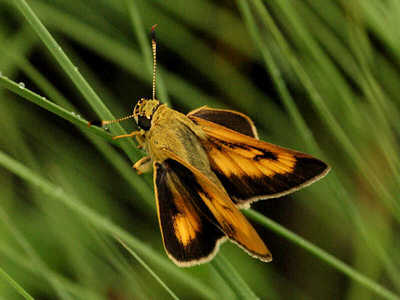 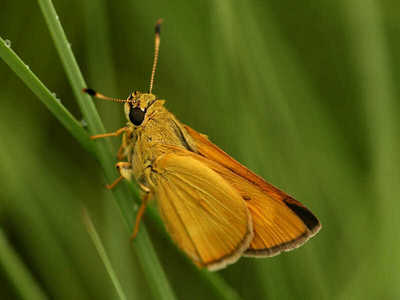 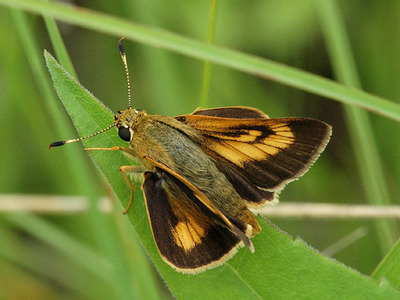 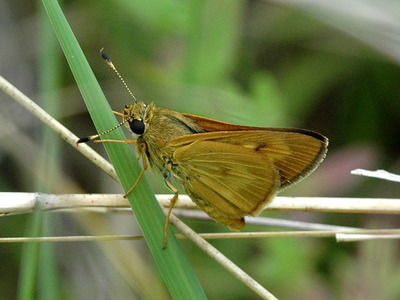 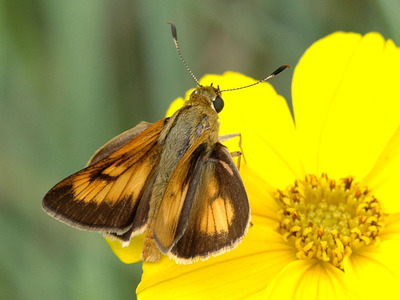 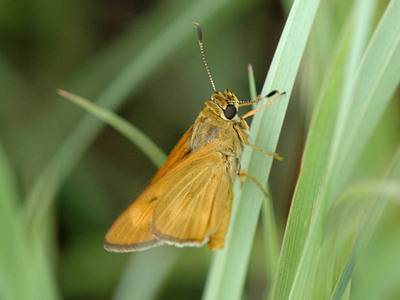 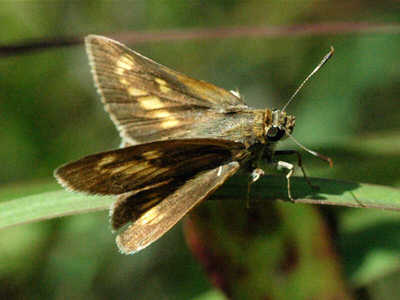 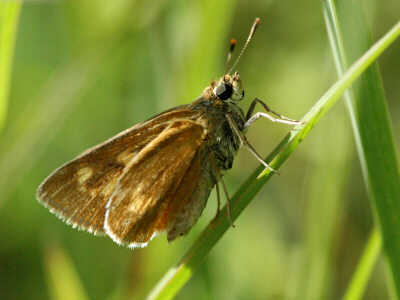 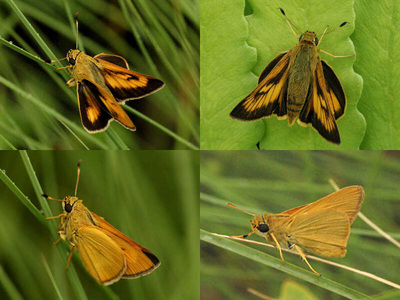 This photo compares the byssus skipper male, left photos, with delaware skippers, a female top right and an unknown gender delaware skipper bottom right. the photos from below and the photo on the top right were all taken on july 2, 2006 on the same hillside at hardscrabble state natural area in lafayette county.