This species is found in wetland areas, dominated by Carex sedges. The Mulberry Wing is often found with the Black Dash throughout the state, but is more commonly seen in the central part of the state. This species is not a strong flier and is found slowly moving through the sedges and grasses.

I have tried to follow this species through wetland areas numerous times without much success. Despite its slower flight, it seems to move continuously throughout the grasses and sedges, and eventually leaves me behind. It is sometimes easy to see the light yellow marks on the hindwing below while in flight, but like all skippers, it is much easier to observe while nectaring.

A small skipper, about the size of a Peck’s Skipper. Below, this skipper is dark, reddish brown with a distinctive large yellowish area that Karl Legler, a longtime Wisconsin butterfly watcher, has likened to an airplane. Above, the male is very dark without any stigma and usually without any light marks. The female above has a yellowish spot band on the hindwing and usually has a few yellow spots on the forewing.

This is a very distinctive species that should not be mistaken for any other species. I have received many submissions of skippers that have been misidentified, but I have only received one misidentified submission of this species.

One generation. This species has a flight period similar to the other sedge skippers, appearing first in mid-June and flying until late July.

This species is fairly abundant where it is found. If there are limited nectar sources in the area this species may be missed, as it will be found only in the moister areas where fewer people are likely to look. 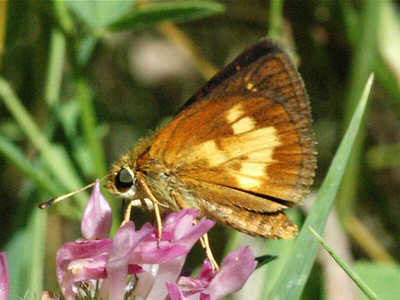 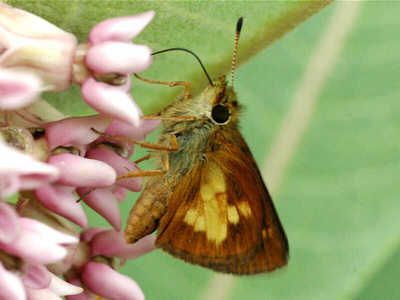 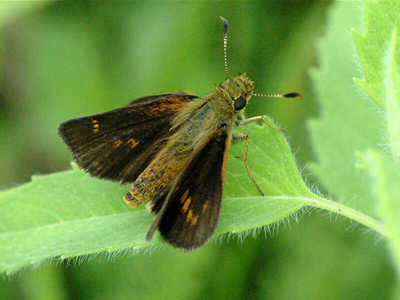