The Clouded Sulphur is a very common butterfly in Wisconsin. It can be found from early spring until late fall, and is one of the latest flying butterflies that does not hibernate overwinter as an adult. In central Wisconsin, it is common to see fields teeming with hundreds and even thousands of these butterflies.

Above, the wings are yellow with black marginal borders. The males have a solid black border, while the females have yellow spots in the border. Unfortunately, this butterfly rarely lands with its wings open.

Below, the wings are a yellowish color with a faint row of small black marginal spots, more evident later in the year, and a double central spot. Some females of this species and the Orange Sulphur are white instead of yellow.

Below, the Orange and Clouded Sulphurs are very similar, but orange on the top of the wing of the Orange Sulphur is very evident in flight, especially in summer individuals, which seem to have more orange than those later in the season. White females of this species and the Orange Sulphur are nearly impossible to differentiate in the field. To confuse things even more, these two species do hybridize.

This species has multiple (3-4) broods from early spring to late fall.

This species is most abundant in hay fields, especially with abundant alfalfa and clover. At times they can easily be seen along the roadsides adjacent to the hayfields which seem to be alive with these butterflies, somewhat like fireflies in the night, as the yellow of their upper wings shines in the sunlight. 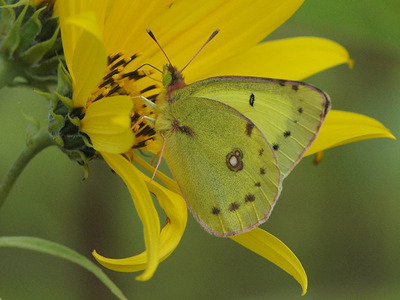 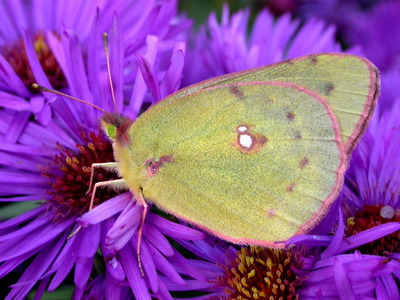 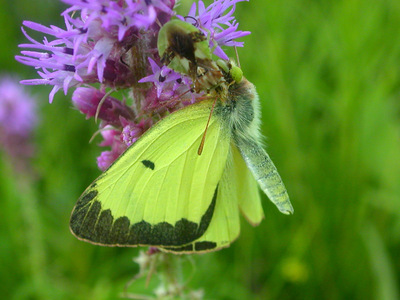 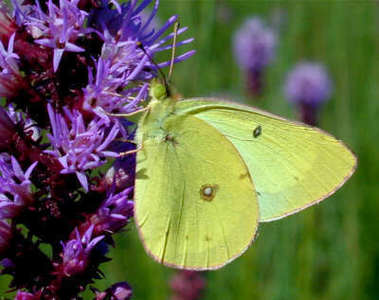