According to Ebner’s Butterflies of Wisconsin, this species was collected near Racine. The record is listed as questionable, but it is certainly within its spotty range. This species does exist in eastern Minnesota; the photographs here were taken in Minnesota within two miles of the Wisconsin border. It is certainly possible that it exists in western Wisconsin.

Below, this skipper is yellowish orange with whitened veins and white fringe. Above, the male has a large open orange area with no stigma and a dark margin. The female is similar, with a dark mark in the middle of the orange area where the stigma of the male would be, and a wider black margin.

The Delaware Skipper is most likely confused with this species. In the field, I once saw both species nectaring on the same plant, and both individuals were somewhat worn. It was very difficult to tell these two species apart just from below: the fringe on the Arogos Skipper was mostly gone, the whitening of the veins was not very obvious, and they were nearly the same size. Fortunately, when seen from above, the Arogos Skipper is easily distinguished from the Delaware Skipper by its lack of markings in the orange area of the forewing.

One brood from late June through July.

Not verified from Wisconsin, but was reported from southeastern Wisconsin in the late 1800s. In 2005, this species was present within several miles of the Wisconsin border. The bottom photo, taken with a 90mm lens from the spot where the other photos here were taken, shows the proximity to smokestacks across the river in Alma, Wisconsin. 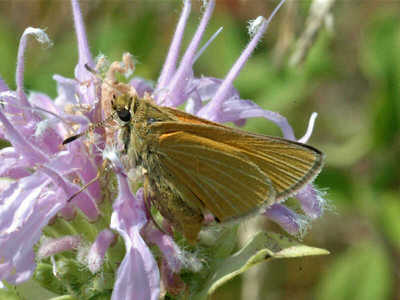 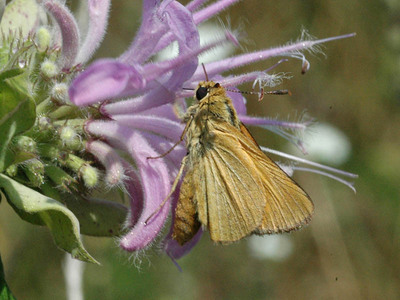 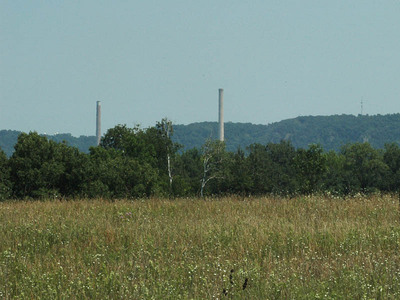 McCarthy Lake WMA, Wabasha Co., MN, July 12, 2005. Looking towards Wisconsin to show how close this species does exist to Wisconsin.