It was very difficult to get a photo that clearly shows the orange on the upper wings. After years of trying, I finally found one that was so dark orange on top that it was very evident from below. In 2005, I was following a female, attempting to get a photo of the upper wings, when a male flew in and started courting her. Both of them were flapping their wings and I was able to take a photo (third image) that clearly shows the upper wings of both sexes. Notice that the male was much smaller, and also had very little if any orange on the wing.

Above, the wings are yellow with various amounts of orange scaling, with black marginal borders. The orange is very evident in flight. The males have a solid black border, while the females have yellow spots in the border. Below, the wings are a yellowish-orange color with a faint row of small black marginal spots and a double central spot. Some females of this species, like the Clouded Sulphur, are white instead of yellow.

Below, the Orange and Clouded Sulphurs are very similar, but orange on the top of the wing of the Orange Sulphur is very evident in flight, especially in summer individuals which seem to have more orange. White females of this species and the Clouded Sulphur are nearly impossible to differentiate in the field. To confuse things further, these two species do hybridize.

This species has two to three broods from spring to late fall. 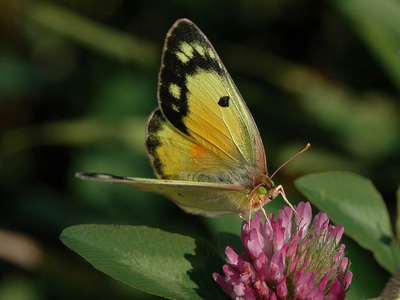 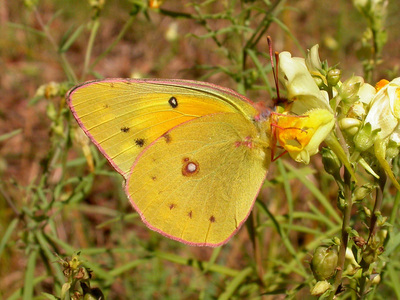 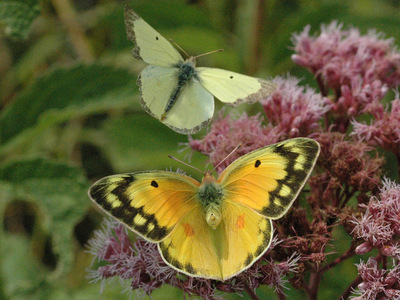