The Western Pine Elfin was only recently recognized as a species found in Wisconsin. Although Ferge did not list it in his 2002 list of the butterflies of Wisconsin, Jeff Nekola had reported it from two Wisconsin Counties in 1996. This species is very similar to the Eastern Pine Elfin, so it is probable that collectors have overlooked it for quite some time.

The Western Pine Elfin is found throughout northern Michigan and in Minnesota just west of Douglas County. In Scott’s Butterflies of North America (1985), he suggests that this species is a newcomer to eastern North America, and may have come along with imported trees. In Jeff Glassberg’s Butterflies through Binoculars: The East, he includes Wisconsin within the range of this species and expected that it would eventually be discovered in the state.

Below, this species is mainly brown but with a boldly patterned hindwing with a white-lined postmedian line and a jagged row of connected inward pointing darker V’s that are very pointed and often capped with black. The hindwing margin has little gray.

The Eastern Pine Elfin often has two bars across forewing cell below, often has a somewhat hoary grayish border, and has fewer inward-pointing V’s on the hindwing below. The Western Pine Elfin below has only one bar in the cell of the forewing, very pointed V’s on the hindwing, and does not have a hoary border. Most of these characteristics are variable, and although individuals at the extremes seem easy to identify, they may be nearly impossible to identify in the field where both are found.

Pine woods and barrens where the host plant of this species grows. It is not clear what this plant is, but in Michigan is suspected to be White Pine.

The Western Pine Elfin has been observed from mid-May until early July in Michigan. The individuals seen in Wisconsin in 1996 were observed from May 31 to June 7.

Not common in Wisconsin. But the Western Pine Elfin has only recently been discovered in the state, and it is possibly more common than previously believed. 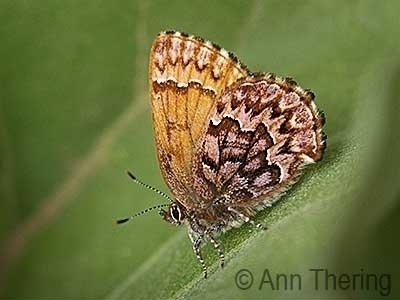