The Orange-barred Sulphur is a rare stray from the far southern states. This mainly tropical butterfly has been found only four times in Wisconsin, but as with the other strays, you never know when you might get a glimpse of this species. In 2008, numerous caterpillars of this species were seen on Cassia. Adults emerged in late September and early October.

This is the largest Sulphur encountered in Wisconsin; its wingspan can reach up to 4 inches. Both male and female butterflies are yellow above with an orange bar covering at least a third of the hindwing. Males also have an orange bar on the front wing. Females additionally have some faint black, submarginal and marginal spots. The underside of both sexes is orange with a variety of spots.

The Large Orange Sulphur, another very rare stray butterfly in Wisconsin, is bright orange above, and below, has a straight diagonal line in the apex of the front wing. In the Orange-barred Sulphur, this line is broken, and the upper surface is mainly yellow with orange bars.

In the south this species inhabits open woodlands and garden areas.

Although this species has several broods in the far south, a stray may be seen as far north as Wisconsin throughout the summer. 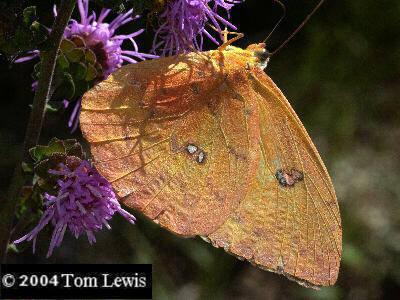 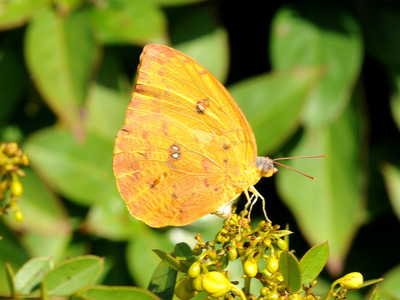