Ebner (1970) notes that the Wisconsin record was the result of four specimens collected in Forest County in 1933. Though it has since been reported from more than ten counties, it is still not a common species within the state.

As this species does occur throughout southern Michigan, including more than half of the southern three tiers of counties, it seems probable that this species could occur farther south in Wisconsin than has been recorded. The photos here were taken in Door County, in areas where Shrubby Cinquefoil was prevalent. All photos are of butterflies nectaring on this plant.

Above, the wings are dark brown with a purplish sheen on the male, black spots, and an orange submarginal line on the hindwing that is much less developed than in the Purplish Copper with the orange somewhat less extensive in the males. Below this species is variable in coloration, but is often more orange-brown on the forewing and lighter on the hindwing, with a thin orange submarginal line.

The Purplish Copper and this species can easily be confused. These species are so much alike, with substantial variability within both species, that even experts can become confused. In general, the Dorcas Copper shows less orange on the submarginal line of the hindwing above. Notice the small orange spot on the hindwing of the males in the last two photos, and then compare it to the photos of the male Purplish Copper.

Edges of bogs, open shrubby areas where its host species are present. Most references note that the larval host is Shrubby Cinquefoil, a species that doesn’t occur in most counties in Wisconsin where this species has been reported. It appears clear that its larval host is some other species in these areas.

Single brooded, with the main flight from late June into August.

An uncommon butterfly in Wisconsin. 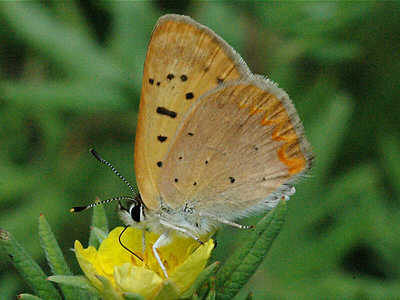 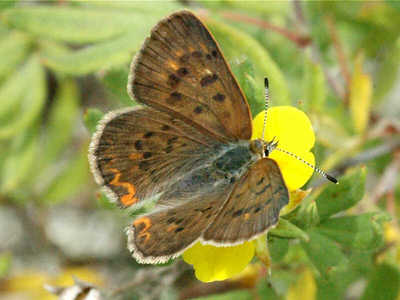 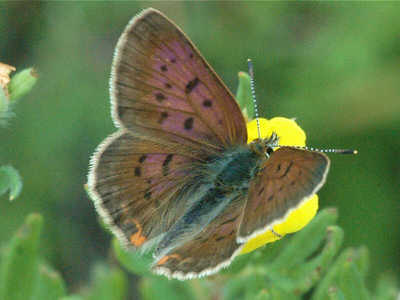 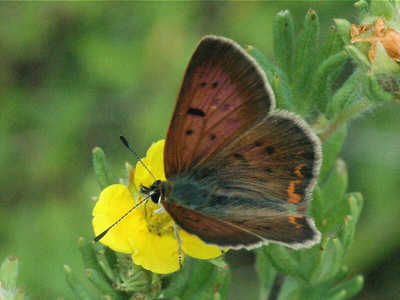