The Acadian Hairstreak often perches on the tops of vegetation, usually near a good patch of willows, its host plant. This makes fresh, light gray Acadian Hairstreaks often easy to spot. On a butterfly count, one member of our group spotted this species, with binoculars, at over 40 yards.

I have seen five very fresh Acadian Hairstreaks perched within a two square meter area during a light rain. With the vegetation bent down, it was even easier to see and photograph (first photo) this species. In 2005, I saw over 10 of these on the same Swamp Milkweed plant, but only eight were left when I snapped the photo (second image).

The Acadian Hairstreak is slightly larger than Edward’s and Banded Hairstreaks. It is light gray underneath, with with a conspicuous submarginal row of orange on the hindwing below that continues over the blue tail spot. A postmedian row of round black spots is very conspicuous on the light background of both wings. The hind wings have obvious tails.

The Coral Hairstreak is similar in size and has the submarginal row of orange, but it has no tails. The Gray Copper could also be mistaken for this species, but the Gray Copper is larger, lighter, and has no tail.

Wetland areas, especially marshes, with an abundance of willow, the host plant of this species.

One brood. It can be found from Late June through July.

Locally common, but often may be found in small scattered colonies. In the Sandhill area in Wood County, in one day I saw over 30 individuals, an unusual concentration for this species. 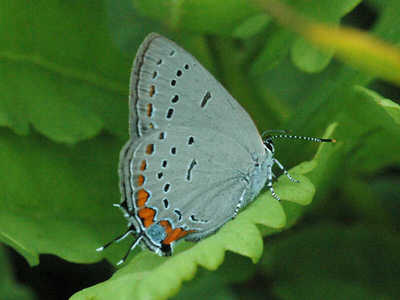 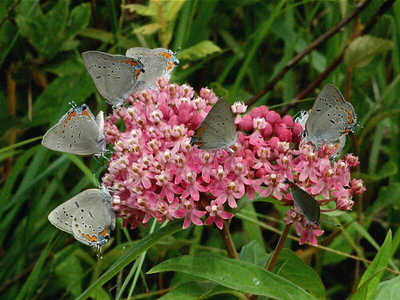 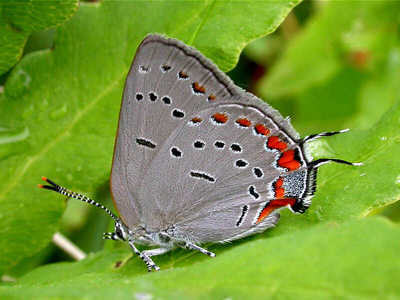