In more mature woodlands, this species may be found perching high in the trees in a sunny spot, with the males defending their area and lashing out at any other butterfly that may flutter by. Battles with other Edwards’ Hairstreaks may spiral nearly out of sight, with the combatants returning and landing at nearly the same location.

Below, the Edwards’ Hairstreak is brownish gray, with a row of darker ovals on the front wing, not connected into a band, and ringed with white. On the back wing, there is a row of submarginal orange crescents, not as prominent as in the Coral or Acadian Hairstreaks, interrupted by a blue spot not ringed with orange, and an obvious tail.

This species is most likely to be confused with the Banded Hairstreak, as these species are found together and are of similar size and color. The Banded has a row of spots on the front wing that are rectangular, connected and not surrounded by white, and form a narrow band. The Edwards’ Hairstreak always has this row of separated spots, and each spot is surrounded by a white ring.

Woodland edges, savanna, and hedgerows that contain a variety of oaks, the main host plant for this species.

One brood, late June and July and sometimes into early August.

May become very common in oak savanna or oak woodlands, but does not congregate in large numbers. You are much more likely to see only two or three individuals in an area, but good nectar sources may attract a crowd. 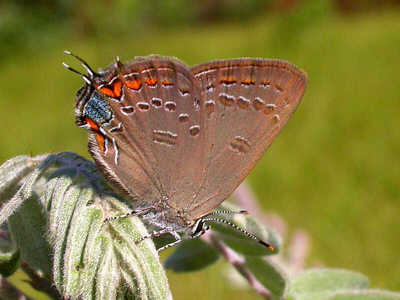 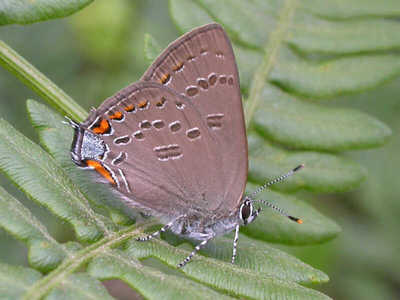 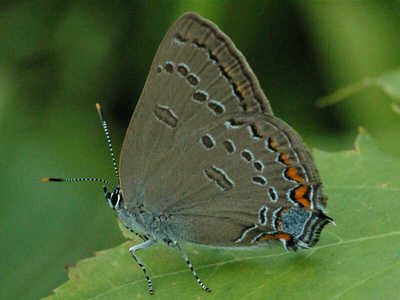 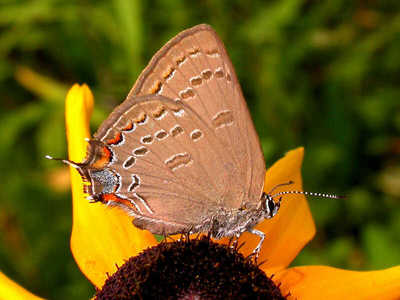