This species and the Edwards’ Hairstreak share many of the same habitats and behaviors. Both species are found throughout the state and where you find one species, you are likely to see the other.

Below, the Banded Hairstreak is brownish gray, like the Edwards’ Hairstreak, but is slightly darker on average, with a band of rectangular spots, usually with the white prominent only on the outside. These spots are more or less connected into a band with which this species gets its name. On the back wing, there are several submarginal orange crescents, a blue spot not capped by orange, and an obvious tail.

The Edwards’ Hairstreak has separate darker ovals that are surrounded by white.

The Hickory Hairstreak usually has wider bands that are white on both sides, and a blue spot that clearly extends to or nearly to, the submarginal row of spots. Bouseman and Sternburg in the Field Guide to Butterflies of Illinois (2001), state, “Sight records without confirmation by collecting are probably not to be trusted.” This undoubtedly is aimed at the the difficulty distinguishing this species from the Hickory Hairstreak.

Woodland edges, savannah, and hedgerows that contain a variety of oaks, the main larvae plant for this species. This species may also feed on hickory and walnuts.

One brood, from late June until early August.

Like the Edwards’ Hairstreak, this species may become very common in oak savanna or oak woodlands, but does not congregate in large numbers. Twenty individuals of this species in one area would be an unusually high number of Banded Hairstreaks. 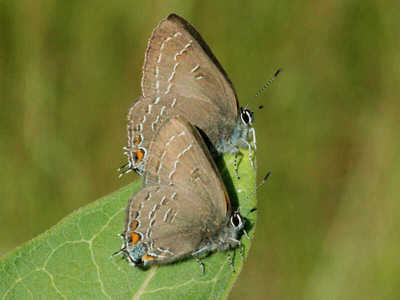 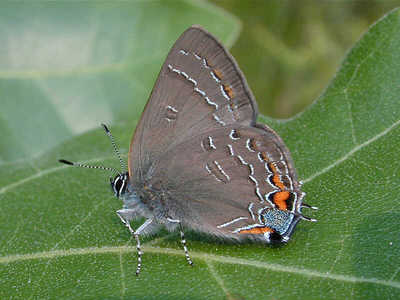 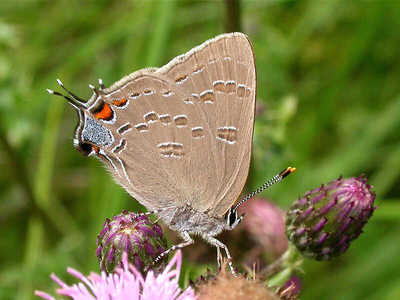 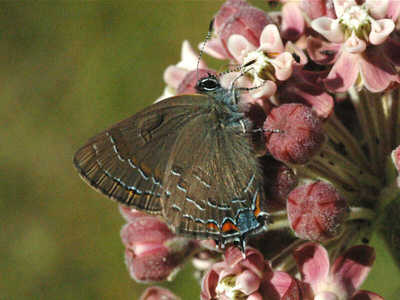 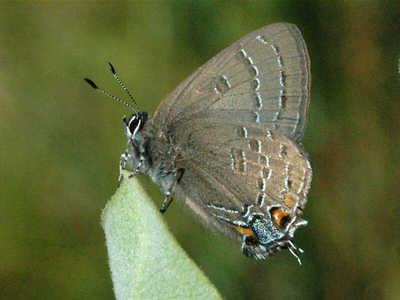