The Brown Elfin is widespread throughout the northern half of Wisconsin, but is seldom very abundant. Mogens C. Nielson in his book on Michigan butterflies says that this species flies low to the ground and may therefore be easily overlooked, but this is also true about the Henry’s, Frosted, and Hoary Elfins. The Elfins, like the Hairstreaks, have a very short flight period in an area, and coupled with the spring flight time, it is difficult to get out into the field when they are actually flying. Consequently, even in an area when you know they occur, you may not be able to observe adults flying every year.

Similar in size and shape to the other state Hairstreaks and Elfins. Below it is a darker brown towards the body and lighter reddish brown marginally. No tails.

The Henry’s, Frosted, and Hoary Elfins are similar, but all have frosting on the hindwing margin that is lacking in the Brown Elfin.

Bogs and wooded areas in the northern part of the state where heaths are prevalent.

Found throughout the northern half of the state, and less common southward. In the right habitat on the right day, this species may become very abundant. 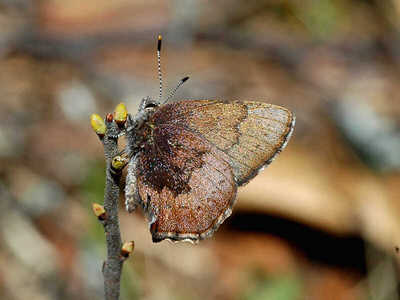 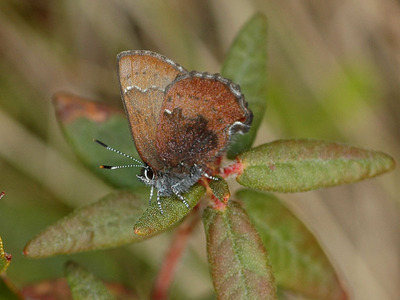 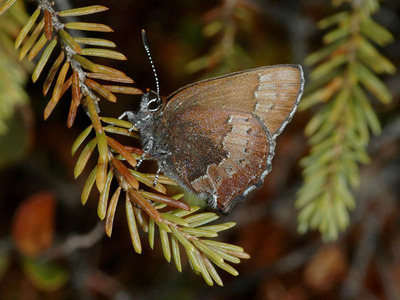 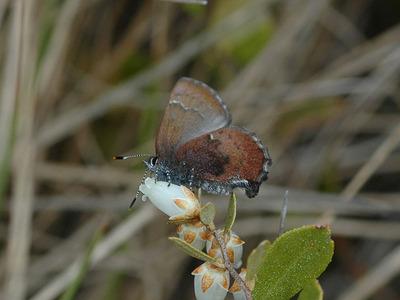