Henry’s Elfin is listed as a species of special concern in Wisconsin. In a conservation assessment for the eastern region of the U.S. Forest service, Kathryn Kirk (WI DNR) lists this species as the least encountered Elfin in Wisconsin. Many of the recent observations of Henry’s Elfin have been in areas of Oak savannah habitat where Lupine grows and studies of populations of butterflies that use this as a host plant, Karner Blues and Frosted Elfins, are ongoing. But these areas may not be the prime habitat areas for Henry’s Elfins in the state, and more fieldwork is necessary to determine the distribution and abundance of this species.

In Waushara County, I have been observing a small population of Henry’s Elfins since 1987 along a woodland trail. I usually see only 2-3 individuals and the most I had observed before 2008 was 5.

I have observed single individuals in woodland areas a quarter mile north and a mile north of this site and believe that the Henry’s is probably found in other areas of the county with similar habitat.

The Henry’s Elfin is reddish-brown color, lighter towards the margins and much darker on the hindwing below. In fresh individuals the outer margin of the hindwing has an obvious frosted area that occupies about two-thirds of the margin, and contrasts greatly with the dark inner half of the wing. These two areas are separated by a postmedian line that may be white the entire length, but always has prominent white marking at either end. The forewing postmedian line on the Henry’s Elfin is smooth and is often straight, but may be wavy.

The Frosted and Hoary Elfins also have frosting on the hindwing margin. The Frosted Elfin often has a dark spot near the short tail on the hind wing, has less of a contrast between the outer and inner halves of the wing, and has a postmedian line on the front wing that is not smooth, that is, you can see that it is made up of individual white segments. The Hoary Elfin can be told from both the Henry’s and Frosted Elfins by frosting on the forewing margin.

A wide variety of woodlands with brushy undergrowth. The host plant of this species in Wisconsin has not been reported, but in Michigan and other northern states the host plants include maple-leaved viburnum, blueberries, and huckleberries.

Found throughout the northern half of the state, and less common southward. The least encountered Elfin in Wisconsin. 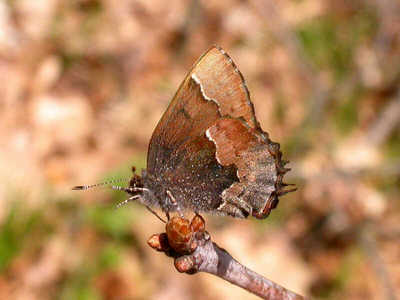 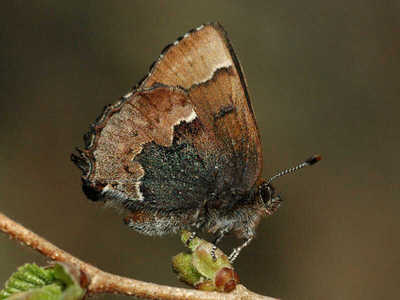 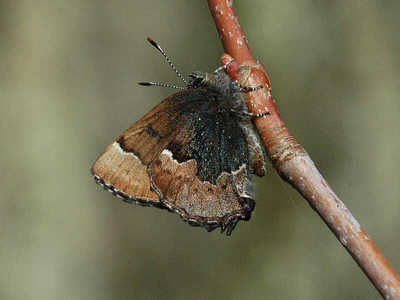 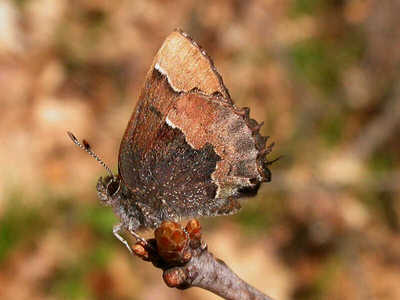 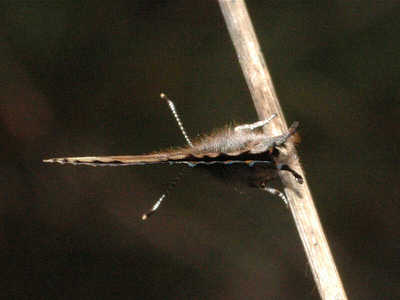 North of Mount Morris, Waushara Co., WI. May 3, 2006. View from behind, showing lots of hair near the body.