The Juniper Hairstreak is found almost exclusively in areas with solid stands of red cedar. In Ebner’s Butterflies of Wisconsin, remarks such as “rarely found near the ground” and “did not fly much unless disturbed” found me banging on many a red cedar and futilely looking up in the upper branches for any sign of this species. In fact, most individuals of this species I have seen have been nectaring on flowers.

However, it may be that this is only because I am not patient enough to look for these species in the top of these trees. Two years in a row, Karl Legler has found this species in a red cedar by watching for males flying around, while other members of the butterfly count found none by looking for them nectaring in the area surrounding the trees.

Below, the Juniper Hairstreak has green scaling on the hindwing and on the leading edge of the forewing. As can be seen from the photos, the amount of green scaling can vary. The hindwing has a white postmedian line, with a darker brownish-red to the inside, similar in shape to that of the other Elfin’s in the state.

No similar species in Wisconsin.

Found in areas of dense stands of Juniper trees.

Two broods. This species can be found in late May through June, and then in late July into August, although an individual found in October was assumed to be from a highly unusual third brood.

Widely distributed throughout the southwestern corner of the state where its host plant, Juniper, grows. This species, like the other Hairstreaks in the state, is rarely found in large numbers. 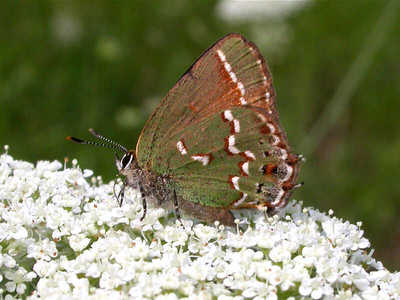 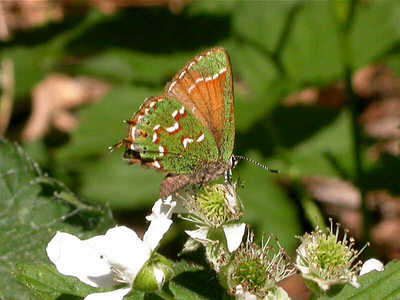 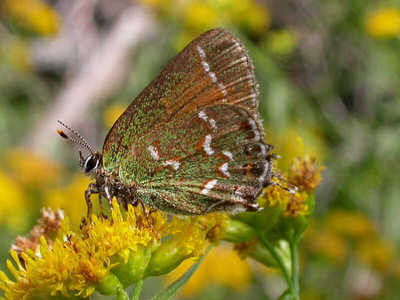 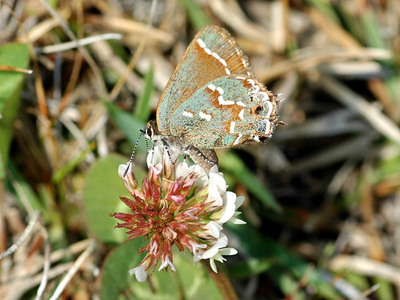