The Reakirt’s Blue is mainly a resident of the southwestern United States and Mexico, but does stray north most years and occasionally makes it as far as Wisconsin. In Ebner’s Butterflies of Wisconsin, he notes that it was reported only twice before 1970. It has now been reported from 12 counties, and has been reported from five counties since 2000.

Above, the male is mostly blue with a thin black margin and usually shows one or two dark spots near the trailing edge. The female is much darker but with some blue usually showing nearer the body. Below, the sexes are essentially the same, with a light gray background and a prominent row of black spots on the forewing and with a large black spot and several smaller black spots on the margin of the hindwing.

In Wisconsin this species should not be confused with any other Blues.

The Reakirt’s Blue is many-brooded in its normal range. It may occasionally find its way to Wisconsin during the summer months and start temporary colonies that cannot survive the winter.

This species is a stray in Wisconsin and is rarely abundant. 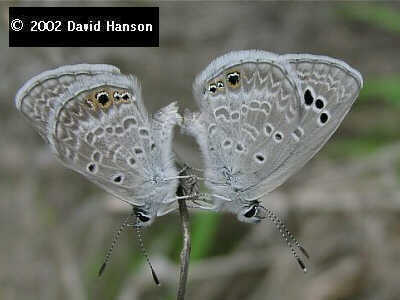 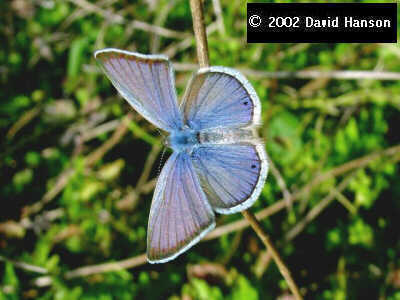