The Spring Azure in the last twenty years has been studied extensively and many believe that it is actually is a complex of several different species. On the Butterflies and Moths of North America web site the ‘Spring’ Spring Azure and the ‘Summer’ Spring Azure are listed as separate species. The taxa listed as the Spring Azure (C. "laden"_) on their web site is a more southern species that feeds mainly on flowering dogwood, a species that doesn’t occur in Wisconsin, and consequently this butterfly has not been found in Wisconsin. The ‘Spring’ Spring Azure referred to here is called the Northern Azure (C. lucia_) and this species is considered to be single brooded. The ‘Summer’ Spring Azure is listed on their web site as the Summer Azure (C. neglecta) a multiple brooded, late spring and summer species. In addition to these differences a newly described species the Cherry Gall Azure (C. serotina) has been recorded from Wisconsin. A single specimen of this species was collected in Marathon County in 1968 by Les Ferge. This new species feeds mainly on wild cherry galls and flies between the broods of the other azures in Wisconsin. Any newly emerged azures in late May and early June could possibly be this species.

The map on this page is the map of all the azures combined, while distribution maps on the subspecies pages are just for those subspecies. Historical records for these subspecies are not necessarily accurate and have not been included here at this time. 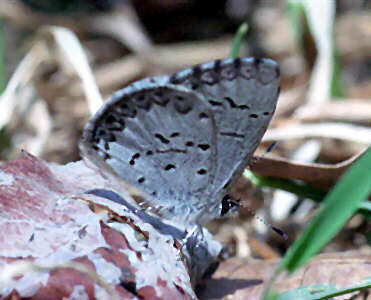 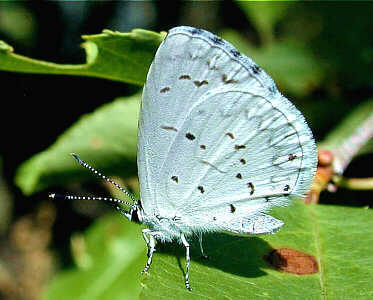