The Northern Blue has been found only in the far northeastern counties in Wisconsin. The ‘Karner’ Melissa Blue is a very similar species that was not listed in the Ebner’s 1970 Butterflies of Wisconsin; several Northern Blue records in that book were probably Karner Blues. The larval host plant of the Northern Blue is Dwarf Bilberry (Vaccinium caespitosum), while that of the Karner Blue is Wild Lupine (Lupinus perennis). The habitats and general distributions of these plants are very different, so it is unlikely that both would be found in the same area.

Above, the male is a light blue with a thin black margin and a light fringe. The female is a black towards the margins with varying amounts of blue on both wings and submarginal orange spots that may even be absent in some individuals. Mogens Nielsen’s Michigan Butterflies & Skippers includes a photo of a female that has no orange spots above.

Below, the sexes are essentially the same, with a light gray background, very prominent black spots, and a row of silvery spots topped by orange and then black crescents. Note that extremely worn individuals, like the one in the last image with no fringe left at all, may have no obvious orange spots below.

In Wisconsin this species could be confused with the ‘Karner’ Melissa Blue, but the ranges of these species do not overlap and they are not found in the same habitat. The Karner Blue is found close to populations of Lupine, the larval host of the Karner Blue, while the Northern Blue is a butterfly of the far northern counties and whose host plant is Dwarf Bilberry.

The main differences between these species appears to be that the orange crescents on the wings below are smaller and less intense on the Northern Blue, and that the female of the Northern Blue above has much less orange than that of the Karner Blue. Unfortunately, many photos online and in books are impossible to identify accurately without knowing where the photos were taken. If they occurred together, these two species would cause significant identification problems.

The Northern Blue is single-brooded, with individuals flying mainly from late June to the middle of July.

Rare in Wisconsin. This species is listed as ‘endangered’ by the Wisconsin DNR and as ‘threatened’ in Michigan, where it is found only in upper Michigan and on Isle Royale. In Wisconsin there are only 4-5 known sites where this species currently exists. 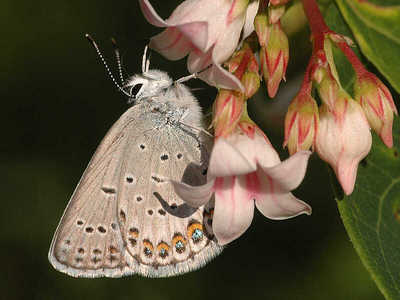 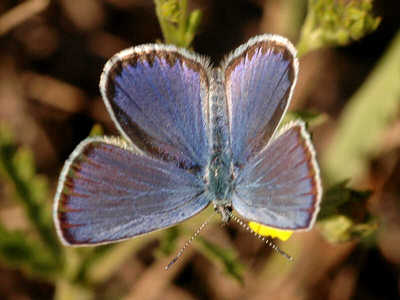 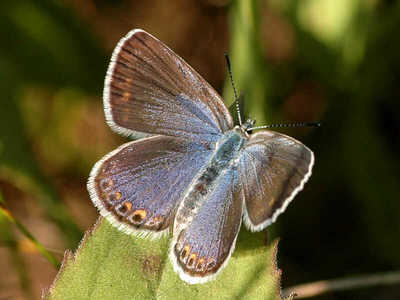 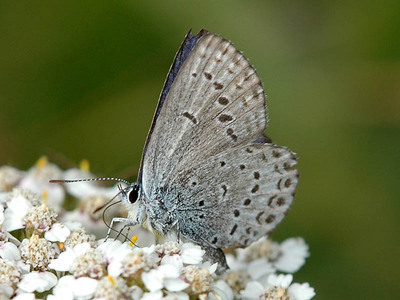 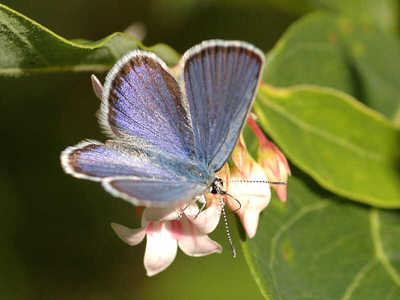 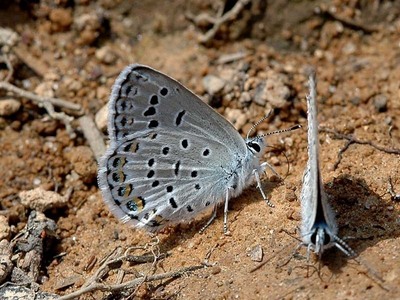 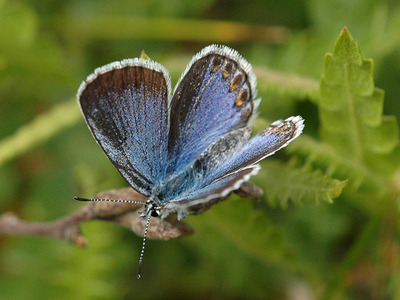