The Variegated Fritillary is an immigrant species that invades Wisconsin yearly in late May or June, with a second generation occurring in July or August. In the late 1980s when I first became interested in butterflies, I saw this species commonly for two years in Waushara County. In 1997, when I became very interested in learning what I could about Wisconsin butterflies and spent much more time in the field, I did not see this species anywhere in central Wisconsin until 2004.

Above, this species is a much lighter orange brown than any of the other Fritillaries, has a distinct light colored band through the middle of both wings, and somewhat scalloped wing margins. It is somewhat intermediate in size between the Aphrodite Fritillary and the Meadow Fritillary, ranging from two to three inches in wingspan. Below, this species is similarly colored to the upper surface, with no silvery spots, a lighter outer edge, and a lighter band through the middle of the hind wing that contrasts sharply with the orange/brown, especially near the leading edge of the wing.

Similar in size and behavior to an American Lady, but really unlike any other Wisconsin species.

At least two broods, with the first one appearing in late May or Early June as immigrants from farther south, and a second brood in July and August. A third partial brood may be observed in some years. This species has been found in Michigan as late as October 31.

An uncommon and unpredictable species throughout most of Wisconsin. Like most immigrants from the south, this species is much more common in southern Wisconsin, as well as near natural migration routes such as the Mississippi and Wisconsin Rivers and along Lake Michigan. 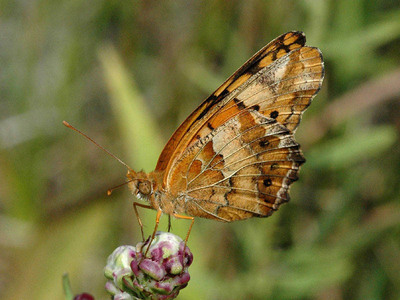 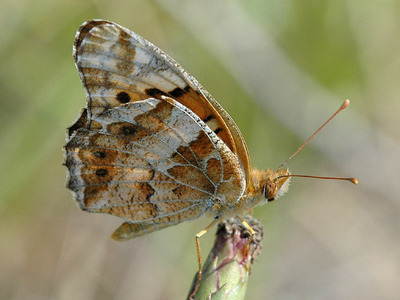 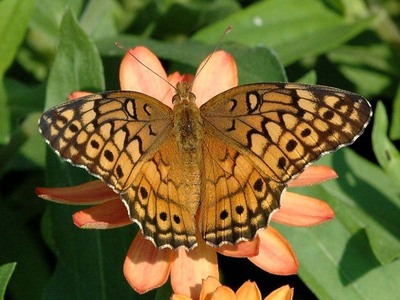 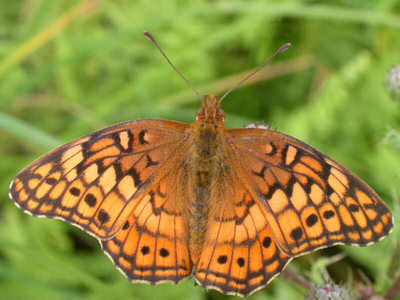