The Purplish Fritillary was first discovered in Wisconsin on August 10, 1991 at Lyman Lake Bog by Robbye Johnson. In the American Butterflies Fall 1998 issue, Jeff Nekola lists likely Purplish Fritillary locations in Douglas County. I checked out these spots and I found them easily, and in substantial numbers, nectaring on Joe-Pye-Weed, Boneset, and Flat-topped Aster.

There are only five site where these butterflies can be found in Wisconsin, all in a small area of Douglas County. There are scattered colonies in northeastern Minnesota, but none as yet have been found in Michigan. The name of this butterfly is still very much in dispute. The common name and the scientific names have both changed within the last ten years, and it is somewhat confusing when looking at older references. The Wisconsin DNR Online Field Guide to rare Lepidoptera still lists this species as the Arctic Fritillary (Bolaria chariclea). Regardless of what one calls it, it is a rare butterfly in Wisconsin and is listed as a species of special concern.

Above, the Purplish Fritillary is very similar to the other lesser Fritillaries, with an orange base and a variety of black markings. On the Purplish Fritillary the wing margins have a very distinct white markings, but in general are fairly dark. There is a submarginal row of black spots that are rounder in the forewing than in the hindwing. Below, the hindwing has a row of thin white spots in the margin, and the hindwing does have a somewhat purplish sheen when fresh.

Bogs, but does come out to the bog edges to nectar on a variety of plants.

One brood. They may be found from the last week in July through the third week in August. These photos were taken August 2-3, 2005, but the butterflies had been out for nearly a week. There were still many individuals flying a week later.

In Wisconsin these butterflies only occur in a small area in Douglas County. Although they may seem abundant when they are found, any individuals seen represent a large portion of the population of this butterfly in Wisconsin. 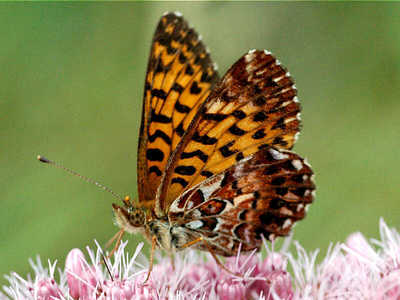 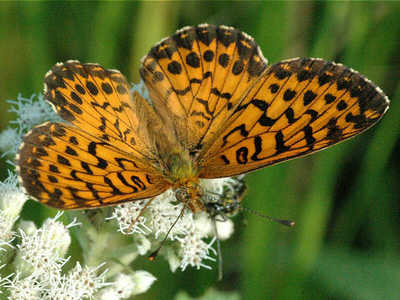 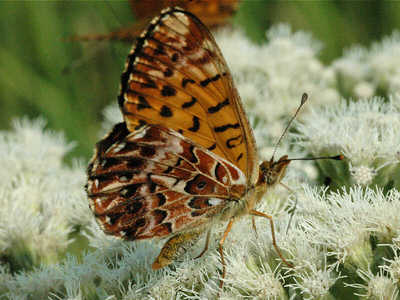 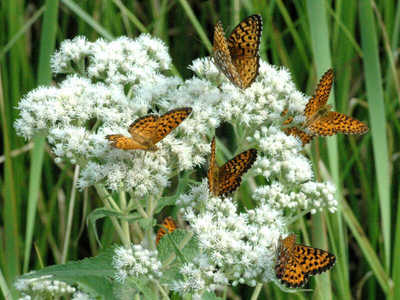