The Gorgone Checkerspot is listed as a species of special concern in Wisconsin. This species is a Great Plains butterfly and is not common east of the Mississippi River, but is more common in Wisconsin than any other eastern state. It is more likely to be found in abundance than other Crescents and Checkerspots; on multiple occasions, I have seen over 50 in a 20×20′ area, including the last image showing 42 Gorgone Checkerspots searching for nutrients on horse dung.

Above, this species is orange and black, with the orange postmedian band on the hindwing completely surrounded with black and with dark marks in the middle of most of the cells. The median band is very distinct on both pairs of wings and makes an obvious letter C from the side. They also usually have some white crescents apparent in the wing margins. Below, this species is very distinctive, with arrowhead shaped crescents in the marginal and median rows. There is some orange on the forewing, but the hindwing is mainly brown and white.

This species is basically orange and black above and, in flight, could easily be confused with many of Wisconsin’s other Crescents or Checkerspots. Resting, it is most likely to be confused with a Silvery Checkerspot from above, but looks very much different below, with the Silvery Checkerspot having a very prominent white large white cell in the middle of the hindwing margin and also a median row of white oval shaped cells, and no arrow-shaped white crescents as in the Gorgone Checkerspot.

Two broods. The first brood usually appears in late May or early June, with the second generation appearing sometime in July or August.

This species is not common in Wisconsin and is listed as a rare butterfly by the Wisconsin DNR, but the Gorgone Checkerspot can become fairly abundant where it appears, and may congregate in fairly large groups to nectar or find nutrients. 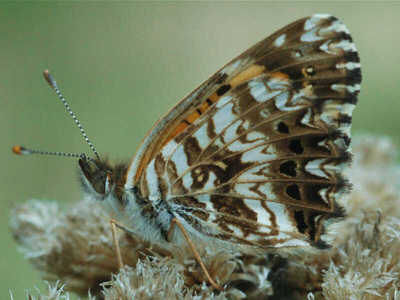 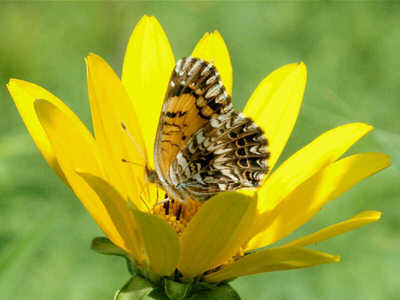 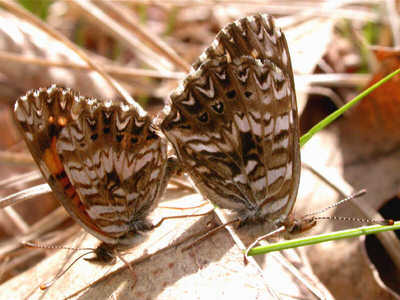 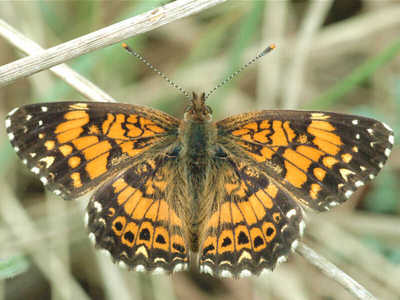 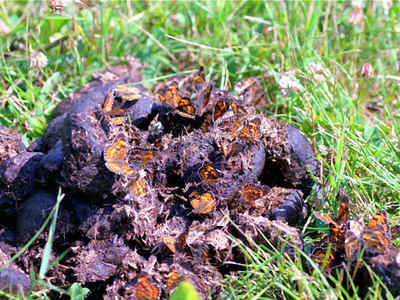