The Pearl Crescent is one of the most common and widespread butterflies in the eastern United States. It is also one of the hardest butterflies to identify with certainty, because of two very similar butterflies, the Northern and Tawny Crescents. The Northern Crescent was only separated from the Pearl Crescent in the last 25 years, and therefore distribution maps where these two overlap are somewhat suspect. In Michigan, the distribution maps in the 1999 edition of Michigan Butterflies & Skippers show the Northern Crescent as mainly a northern species, while the Pearl is a more southern species and there is little overlap. In Wisconsin, I think that there is a much broader overlap of these two species and throughout central Wisconsin their identification brings many headaches.

Above, the species is black along the margins of the wings with a row of thin submarginal crescents that may or may not be noticeable. The rest of the wing is basically orange with a variety of variable dark markings. The spring generation is sometimes very different looking than the later generation. Notice the female from Greenwood Refuge in Waushara County. This individual has very obvious crescents in the wing margin and looks very similar to a spring Pearl Crescent taken by Will Cook in North Carolina. In the female hindwing, there is a solid marginal line that breaks up the orange area, while the male may be more somewhat more open.

Below, there is a darker area in the margin of the hindwing that usually includes a pearl-colored crescent.

All three of Wisconsin’s crescents are very similar. The females especially are extremely similar and I do not believe they can be distinguished in the field with any confidence, and it is best to check the males to determine whether the species is present. Above, the males of the Pearl Crescent are similar to the females, and just slightly more open in the hind wing, but the males of the Northern Crescents are much more open and have a very distinctive dark patch in the middle of the hindwing margin below. Males of the Tawny Crescent look much like the female from above, but are very uniform in color throughout the hindwing below with no dark marginal spot.

Two broods. The first brood is found from early May through early July, and then a second brood is present in August through mid September.

Common throughout southern Wisconsin. Most often noticed along gravel or dirt trails in open areas. 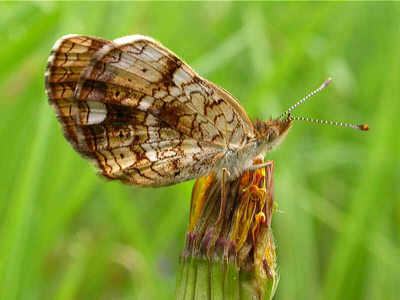 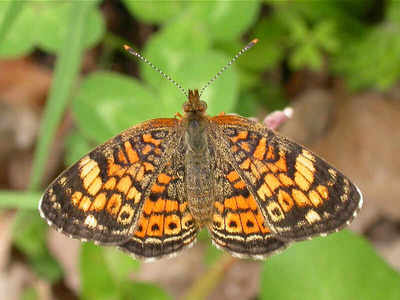 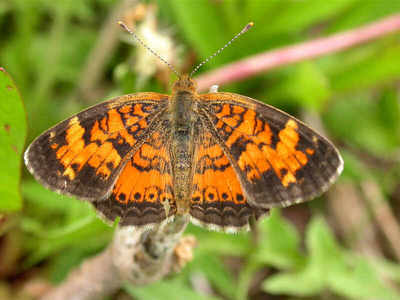 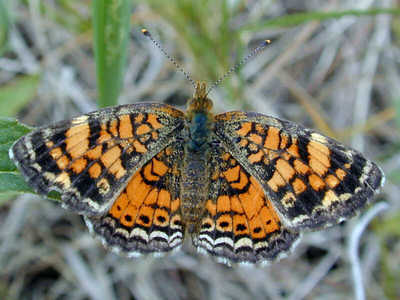 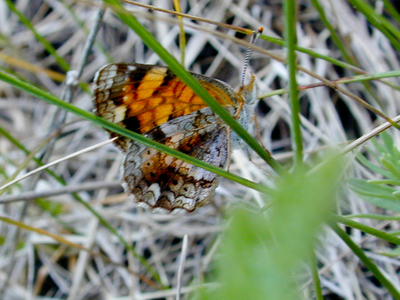 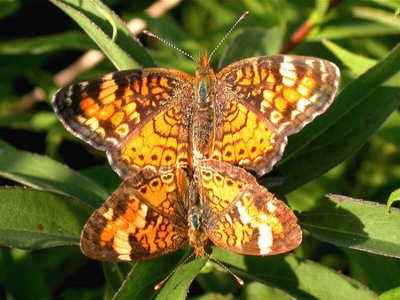