The Tawny Crescent looks very much like the Northern and Pearl Crescents, and I have yet to see an individual that I could say with certainty was a Tawny Crescent. All photos I have taken of crescents have orange-tipped antennas, whereas the Tawny Crescent’s antennae are black and white. In Butterflies of Wisconsin, Ebner tells of a collector in Marinette County in 1955-56 who attempted to discover this species in Wisconsin and collected over 5,000 crescents, of which only 3 were this species!

Dave Hanson’s photograph of the male is the first photograph from below that I have seen from Wisconsin, and I was extremely happy to see visual proof that this species is present in the state. I believe that photos of females and males from above are so similar to the other crescents that it is impossible to identify this species from those photos.

The Tawny Crescent is listed as a species of special concern in both Michigan and Wisconsin.

Above, both males and females are very much like the female Pearl and Northern Crescents, and usually are just slightly darker looking because of the larger amount of black markings. Below, the males of this species is uniformly colored on the hindwing, with little or no darker spot near the middle wing margin as in the Pearl and Northern Crescents.

The females of all the crescents are very similar, and before identifying an individual as this species, you need to look at the males and compare the hind wing below. In the Pearl and the Northern Crescent, there is a significant darker area near the middle of the hindwing margin, which is absent in the Tawny Crescent.

The Wisconsin DNR says that this species is fond of drier, sandy habitats including barren areas, woodland openings, and roadsides.

One brood usually in June and early July, with a possible partial second brood in August

It is difficult to tell whether this species is just uncommon, or if it is just overlooked because it is so very much like the Northern and Pearl Crescents. I look at every Crescent that I see in hopes of viewing this species, but I have had no success so far. It is listed as a species of special concern in both Michigan and Wisconsin. 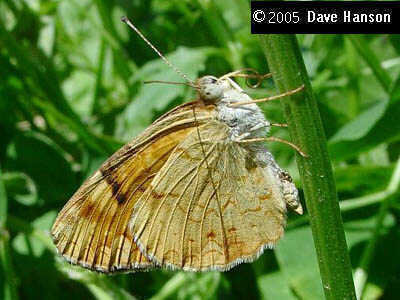 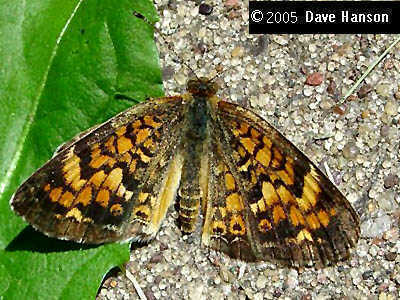 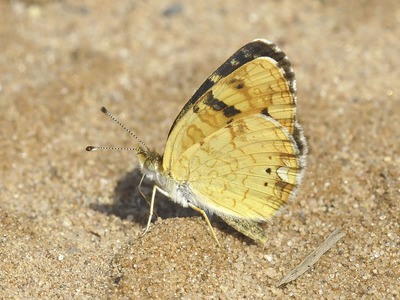 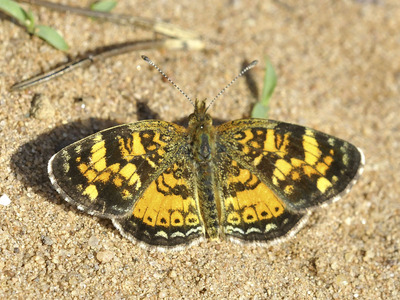