The presence and abundance of the Checkered White varies greatly from year to year. Also, information about this species is not consistent. In Illinois, Bouseman and Sternburg (2001) refer to this species as a migrant from farther south, that must replenish itself each year. In Wisconsin, Ebner (1970) seemed to think that it is a year-round resident. Perhaps this species may be able to occasionally survive the Wisconsin winters, but also become replenished from farther south on a regular basis.

I only saw this species once in Wisconsin during the years 2000 through 2009, although I did see it twice during this time in Minnesota, at McCarthy Lake WMA, Wabasha County. It is a very uncommon migrant, but may become abundant locally once it enters the state. Any white butterfly in open fields should be examined closely to check whether it might be this species.

White butterfly with extensive black or brown markings. The female has much more extensive markings. Like the Mustard White, this species has a spring form that has dark, greenish veins beneath.

Open fields and disturbed areas where plants in the mustard family, the larval host plants of this species, occur.

They may have three or more generations in the south, and they could be present in Wisconsin from May through October.

This species may be able to survive a mild Wisconsin winter in the southern part of the state, but most likely occasional strays from farther south enter the state and are able to reproduce here, but the colonies do not persist. 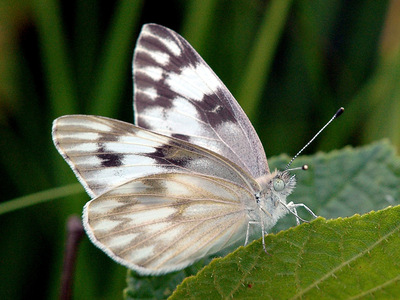 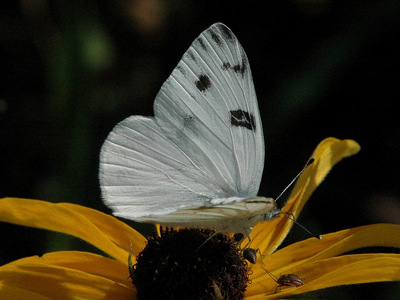 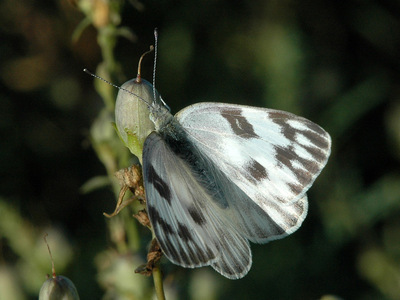 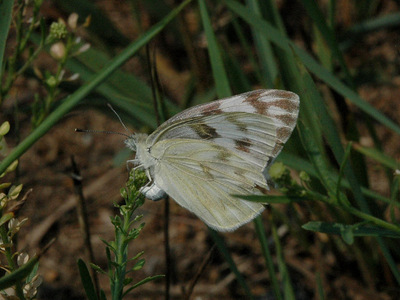