The Question Mark is slightly larger than the other “punctuation” butterflies in Wisconsin, but otherwise very similar. This is a very well known butterfly, found throughout Wisconsin, but is fairly uncommon. During NABA Wisconsin butterfly counts from 2000-2005, which includes 97 counts, only 142 individuals of this species were seen.

Above, the Question Mark is orange with various black spots, including a black horizontal mark on the forewing that is characteristic of this species and is not found in any of the very similar commas. Learn to look for this field mark first. I used to have trouble distinguishing the Question Mark from one of the commas in the field until I learned about this field mark. In Butterflies of the East Coast, Cech & Tudor refer to this mark as being at the end of the end of the “forewing dot row”. This dot row is a useful characteristic for identification the Polygonia in Wisconsin. In the darker summer form (second photo), the hind wing is much darker, but in the fall/spring form (third photo) the hind wing is lighter orange and black spots are noticeable. Notice also the violet colored edges to the wings that are most obvious in fresh fall/spring individuals.

Below, this species may be fairly uniformly colored as in the first photo, or heavily banded with white and dark areas. The characteristic silvery spot in the middle of the hind wing is broken, looking at times very much like a question mark. This mark rarely looks broken in the commas.

All the commas are very similar to the Question Mark. Look for the horizontal mark on the forewing above or the silvery question mark on the hind wing below to determine this species.

Found in a wide variety of habitats, including backyards, parks, and woodland edges, especially along woodland trails.

Two flights. The Question Mark is thought to overwinter as an adult, then mate in the spring; the first generation is flying from late June through mid-July. They second generation appears in August and may be seen flying into October. On the east coast, there are large migrations of this species south in the fall and north in the spring, so that the north is repopulated regularly. It is not clear if this migration is as common in the Midwest, including Wisconsin. More study on this migration is definitely needed.

Usually seen singly, but rotting fruit, tree sap, or a good nutrient source may attract a congregation. In the 97 NABA counts held mainly during July, only two counts included ten or more individuals. 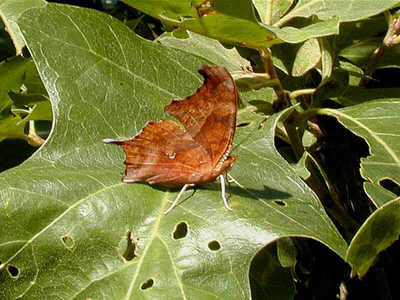 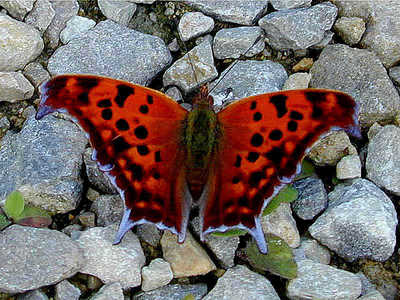 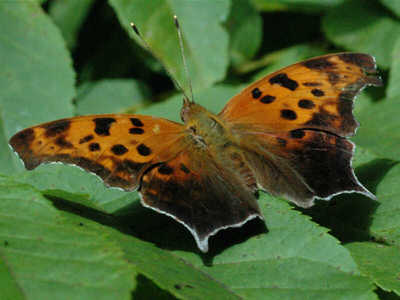