The Eastern Comma is the most common of the commas and is found throughout the state. Adults of this species hibernate and appear on warm sunny days in the early spring, even when there is still snow present. After a long winter it is a real pleasure to see these butterflies flying around.

Above, this species is very similar to the other commas, with a lot of orange, dark wing margins, and various black spots. The forewing dot closest to the trailing edge often has a noticeable faint dot just above it; this dot is occasionally very obvious. There is also a distinct dark spot in the middle of the hindwing; however, this species does have two different forms, very similar to the Question Mark, where the summer form is much darker on the hindwing, making the center dark mark on the hindwing nearly impossible to see.

Below, this species is usually heavily banded with light and dark regions (but sometimes is nearly uniform in color like the Question Mark). It has a very prominent comma that most typically has barbs on both ends. Though the species is variable, almost all illustrations or photos of this species in field guides are similar to the images here.

Above, this species could easily be mistaken for any of the other commas. In the Eastern Comma, the forewing dot closest to the trailing edge usually has a very faint mark above it. This mark is usually missing in the Gray Comma, and usually much darker in the Green Comma and the Satyr Comma.

In the hindwing there is a definite row of lighter spots, even in the darker summer form. This is also present on the Green Comma, but not on the Satyr Comma, which has a lighter continuous band there. There is a dark spot in the middle of the hindwing that is lacking in the Gray Comma.

Below, the comma is thicker and barbed at the ends, and somewhat similar to the Green Comma, but the Green Comma also has a green submarginal band on the fore and hind wings that distinguish that species.

A woodland species that is most often seen along woodland edges and trails.

Two broods, very similarly timed to the broods of the Question Mark. I often see this species come out of hibernation on warm days in late March and in early April. The summer brood is present from late June through July while the winter brood usually flies in August through October.

This is the most abundant comma in Wisconsin, but don’t expect to see more than ten in a day. These butterflies are usually seen singly along woodland trails. Learn to keep your eyes and binoculars peeled to the road ahead of you as you walk through the woods. Sunny openings are often the most productive. 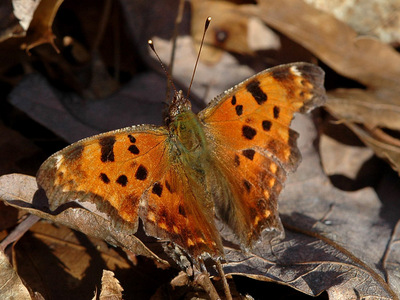 An overwintered individual taking in the warm sunshine of spring 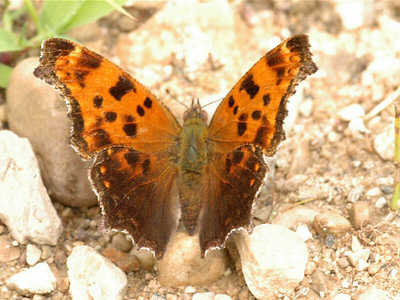 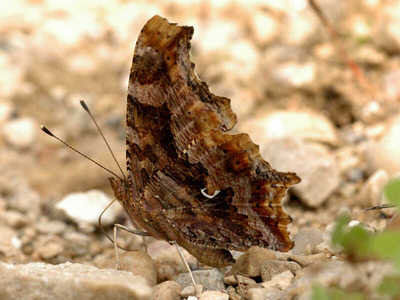 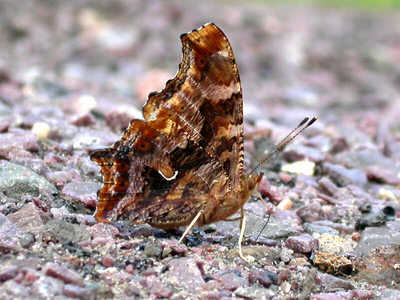 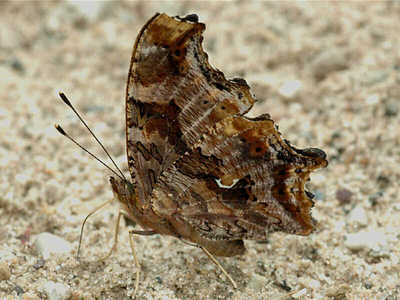