The Satyr Comma was not listed in Ebner’s 1970 Butterflies of Wisconsin. Possibly, because they look very much like the Eastern Comma, they were simply overlooked. But they have now been recorded from ten of the northern counties in the state, and are probably more common than the records suggest.

The first individual pictured here was landing on my back, pants, and hat, making it difficult to take a photo with the camera mounted on the tripod. I took my hat off and threw it on the ground where the Satyr Comma had previously landed, in hopes of having it land there, but it proceeded to land directly on my head. Eventually it landed right top of my camera lens, and I was able to observe it from inches away, but was still unable to take a photo!

The second individual I saw being harassed by a Northern Crescent on two occasions. The Northern Crescent attacked the Satyr Comma, and the two butterflies whirled around for 5-10 seconds within a foot of the ground.

Above, this butterfly is orange with a variety of dark spots including one dark spot in the middle of the hindwing. The hindwing has a light margin, an obvious dark submarginal line, a lighter nearly continuous band inside of that dark area, and a third faint, discontinuous dark band inside of the light area. Notice that the second individual in the images is somewhat darker than the first. Below, it is similar to the Eastern Comma, but lighter overall, with a thicker comma that is barbed on one end.

Above, the other comma species have black or violet margins on the hindwing, with a distinct row of yellow spots. This row of spots is a continuous light band in the Satyr Comma. The forewing dot nearest the trailing edge of the wing has a very distinct double above it that is prominent only in one other Wisconsin species, the Green Comma. Below, the Satyr Comma is somewhat lighter than the other commas, and its comma can be similar to the Eastern Comma. It is best to use the upper wings to distinguish this species.

Trails through woodlands and woodland edges in only the far northern counties of the state.

One brood. This species hibernates, comes out of hibernation in late spring, mates and the new generation flies from late July through September before it hibernates until next spring.

Uncommon in the northern counties of the state. This species, like many of the other commas, is often seen singly. 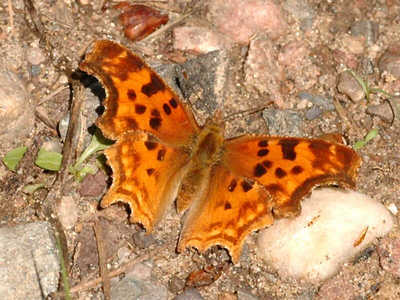 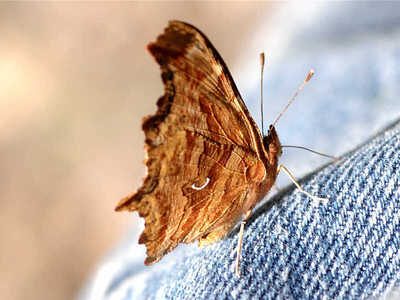 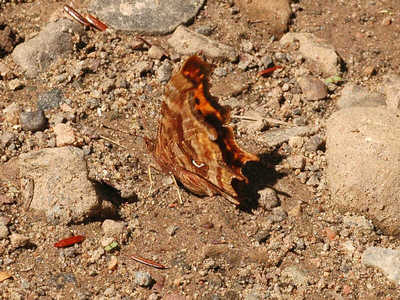 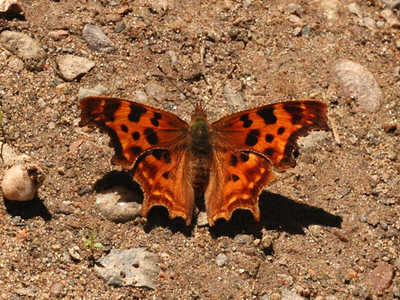 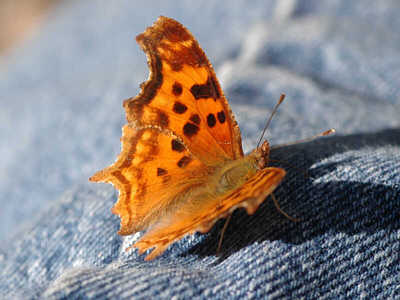