The Green Comma is found only in the northern counties of Wisconsin. It is called a Green Comma because of the greenish submarginal bands on the underwings. In Butterflies of Wisconsin, Ebner wrote that this is the “best distinguishing characteristic” for identifying this species. But it is difficult to notice the greenish color in photos of this species without already knowing that they are Green Commas, so this may be a useful identifying characteristic only for pinned specimens.

Very similar to the other commas in the state. Above, the Green Comma has somewhat more jagged edges, the black margins of the wings are more distinct, a prominent yellow spot band on the hindwing, and usually a dark spot above the spot closest to the trailing edge of the forewing. Below, the comma is thick and often clubbed or hooked at one end and has greenish bands of spots near the margins of the wings. Females are variable below and may be more uniform colored, as noted in Nielsen’s Michigan Butterflies & Skippers.

Above, this species is similar to the Eastern and Gray Commas, but has very jagged wing margins and is more boldly marked with black including an often prominent black dot just above the dot nearest the trailing edge of the upper wing, a dot that is lacking or faint in the Eastern Comma and Gray Comma. The Satyr Comma has this black spot also, but does not have a row of yellow spots on the hindwing.

Below, the Green Comma is difficult to distinguish from the other commas, especially in overwintered, worn spring butterflies, where the bands of greenish spots near the wing margins are difficult to see. It is best to see both the upper and lower wings to identify this species.

More confined to woodlands than the other commas. This species is found in boreal forest habitats, and is most often seen sunning itself along woodland trails.

One brood. This species overwinters as an adult, flies and mates in the spring, and then fresh butterflies are seen in late July through September, when they hibernate for the winter.

Uncommon in Wisconsin, even in the northern counties where it occurs. 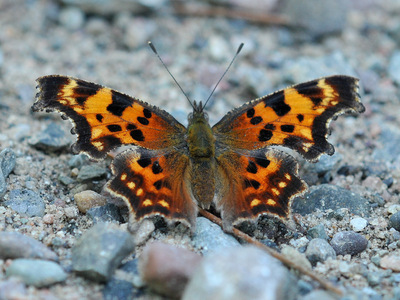 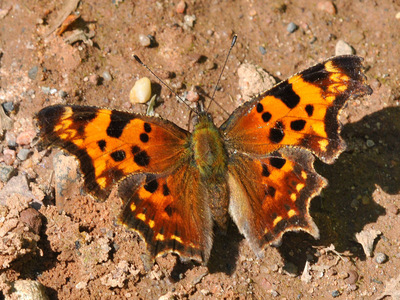 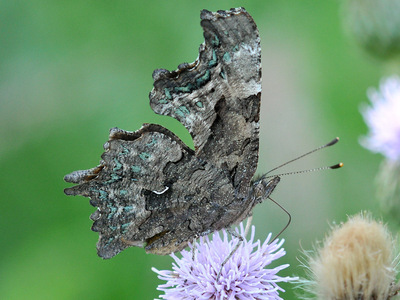 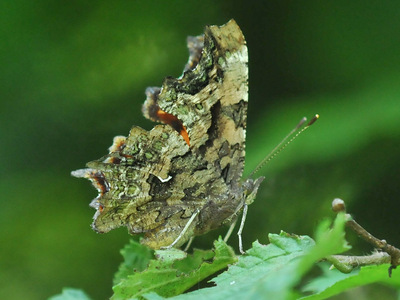 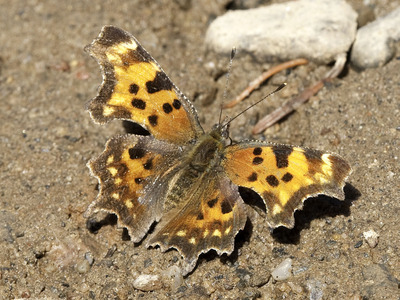