The California Tortoiseshell is a very rare migrant from the west. It has been recorded from Michigan, New York, Pennsylvania, and Vermont in the east as well as most of the western states, and was listed in Ebner’s 1970 Butterflies of Wisconsin.

Above, an orange butterfly, with wide black margins and a few small black spots on the forewings. Below, this species is brownish/gray and is similar to many of the commas, but lacks the silvery spot in the middle of the hindwing that characterizes those species.

A very rare migrant from the west.

In the west, this species has large migrations and thousands of these butterflies may be seen in a single day. In Wisconsin, the species is very rare. 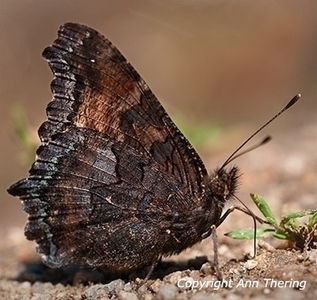