The American Lady, Painted Lady, and the Red Admiral are all very familiar butterflies throughout the United States, but despite their abundance and wide distribution there is still confusion about their migration and ability to overwinter in the northern states such as Wisconsin.

Historically, very little was known about insect migration, and since these three species occur early in the year, it was assumed that they must hibernate and overwinter as adults, like the Commas and Tortoiseshells. In Ebner’s Butterflies of Wisconsin, published in 1970, Ebner writes that all three species overwinter as adults. Much has been learned since then, and most authors now realize that all three species probably cannot survive Wisconsin’s severe winters, and populations must be repopulated from migrants from farther south.

Since there is still much to be learned about their migrations and behaviors, a web site dedicated to studying these three species, the Red Admiral and Painted Lady Research Site, is asking for volunteers to send in their observations.

Found in a variety of open habitats including old fields, meadows, and roadsides where their major host plants, Pussytoes and Pearly Everlasting, are found.

Several broods. In most years this species can be found in early May, probably immigrants from farther south. These mate, lay eggs, and a new generation emerges in July, and then a second brood emerges later in the summer and into the fall.

This species varies in abundance from year to year, and is usually found singly, but is occasionally found in much greater numbers. In 2001, there was a large influx of Red Admirals and American Ladies in the spring, and in early May I counted over 40 of each of these species, flying swiftly all over the golf course, greatly distracting me from all aspects of my golf game — including landing on my golf ball as I was about to putt! 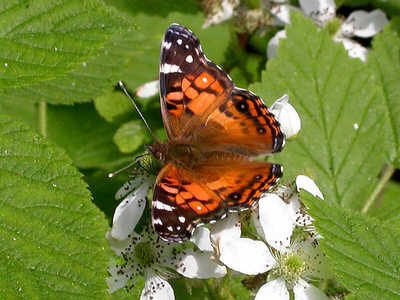 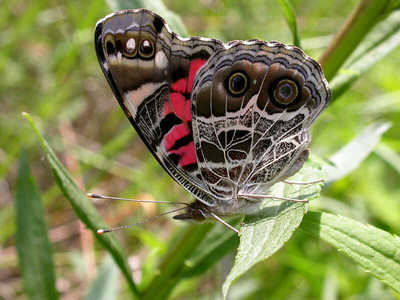