The Viceroy is a mimic of the Monarch and can easily be confused with it, especially in flight. The Viceroy is smaller, is found along wetland areas where its host plants, willows, are found, and has a dark postmedian line on the hindwing that can be seen from above or below. This butterfly, like the Monarch, is also found commonly throughout Wisconsin.

Essentially the same above and below the Viceroy is an orange butterfly with heavy black veins, including one through the middle of the hind wings, and has white spots in the black margins of the wings.

The Monarch is similar but is larger and lacks the dark postmedian line that is found in the hindwing of the Viceroy.

Wetland areas, especially along streams, where willows, its host plants are found.

Two broods. Late May through July and then late July into September.

Although it is common throughout the state, this butterfly is not usually seen in large numbers 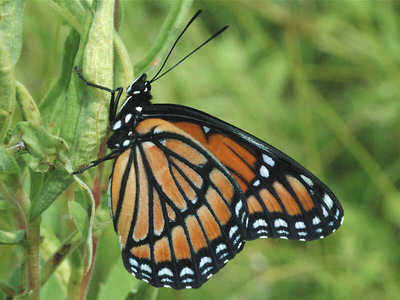 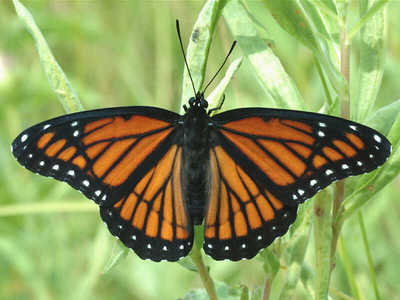