This is a more northern species and I only have seen this one individual. This species is apparently not very photogenic as this photo is the only one of a live specimen that I have seen on the internet. Herschel Raney identified this photo as this species and has posted it on his Arkansas robber fly site. In the original description of the species Bromley (1929) says that it is most closely related to L. sacrator, which superficially with the yellow hairs on the legs and general appearance, I did think that this individual might be L. sacrator with many fewer yellow hairs on the first abdominal segments. There is no record of this species in the literature as occurring in Wisconsin, but it has been found in several counties in northern Michigan and this photo was taken in Marinette County which borders upper Michigan.

Not exactly like any of the others found in Wisconsin, but the males legs look very similar to the legs of L. sacrator, which was flying with this species and it is somewhat like L. thoracica with the darker facial hairs and darker abdomen.

Apparently not common, with few records throughout the New England and areas surrounding the Great Lakes. As of March 12, 2009, I have not seen any photo of a live specimen of this species online except for the one here, and only one photo of a pinned specimen. 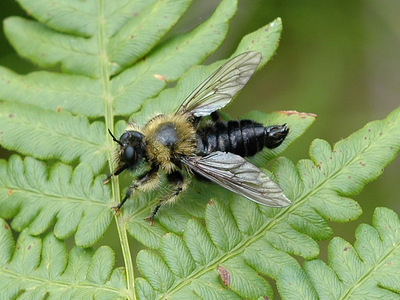