This is not a very common species in central Wisconsin, but it may be that it is an earlier season species and I have missed it since I don’t get out as much in the field until mid-June. This species is usually the first robber fly that I see in Waushara County with my earliest date as May 25, 2007.

This is mainly a blackish brown fly with white markings on the lateral margins of abdominal segments 2-5. Notice that these marking do not extend to the dorsal surface of the abdomen and these markings are not seen in the photos taken from above. The hairs on the face of the male are very dense and golden above and black on the margins. The hairs on the face of the female are golden in the middle and black on the sides. All the antennal segments are black and the scutellum is convex with long black hairs. All segments on the abdomen have white hairs with the hairs longer and more abundant laterally.

Several species of Cyrtopogon are very similar and could be mistaken for this species. In fact, I did mistake C. laphriformis for this species since it superficially resembled it and was found in the same location where I have found this species. Michigan has recorded five additional species of this genus for which I have not seen Wisconsin records and several of these should be expected to occur here. Characteristics that are used in keys to distinguish these species include the scutellum, the color of the third antennal segment, and dark spots on the wings. None of these characteristics are probably useful in identifying these species from photos.

I have seen this species in Wisconsin in savanna or barrens area. In central Wisconsin I have seen these mainly in areas where Karner Blues also occur.

I have never seen more than one of these in a single day. 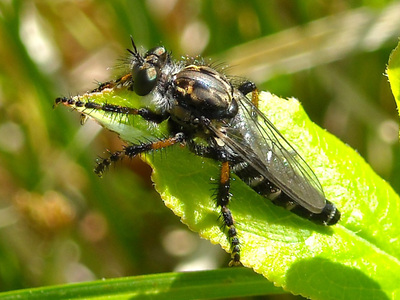 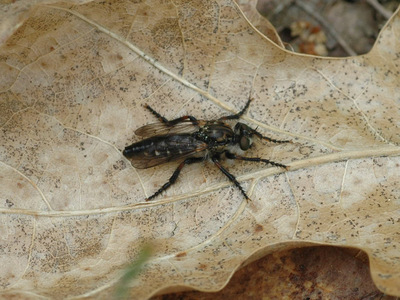 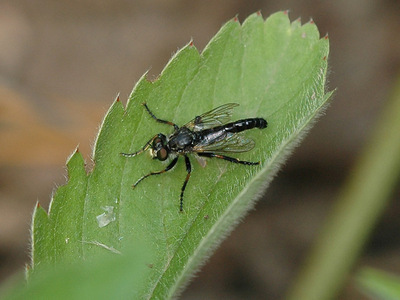 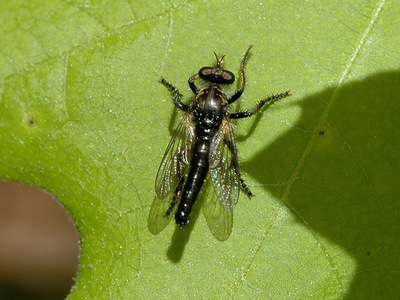