This is a small rather inconspicuous robber fly. The first time I ever saw was one, I did not recognize it clearly as a robber fly. Fortunately, I did take a photo and latter in the winter realized that I had seen this species. Males and females of this species are quite different looking because of the females swollen abdomen. This species is one of two introduced species of robber flies. Old references to D. baumhaueri are this species since they did not realize it was the same species as that found in Europe and northern Africa.

This is mainly a black with the femur and tibias of the first two pairs of legs yellowish with black just on the top of the femurs. The find femur and tibia is black except yellowish at the proximal ends of these segments. The hind tibia and the first tarsal segment are noticeably enlarged. Although there are hairs on the legs, there are no bristles, so these look less hairy than the others in this subfamily in Wisconsin. The male has a thin abdomen with very light markings on the rear of each segment, but the female has a much enlarged abdomen that is somewhat orange beneath but can usually be seen.

Late May through July.

Baker and Fischer in their 1975 paper on the Michigan robber flies, say that this species can become very abundant, especially around flowering trees with a lot of small prey flying. They say that more than 100 individuals could be captured in a day! I have seen three individuals in one day. 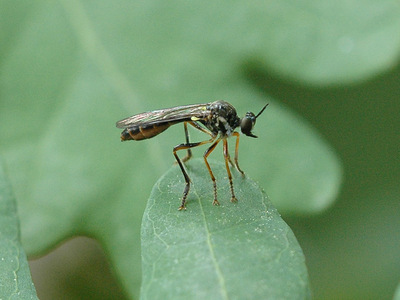 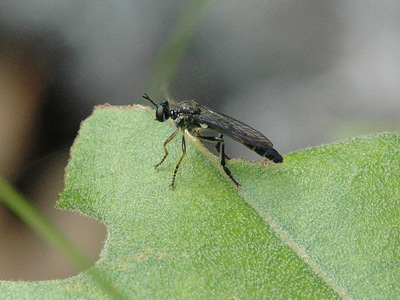 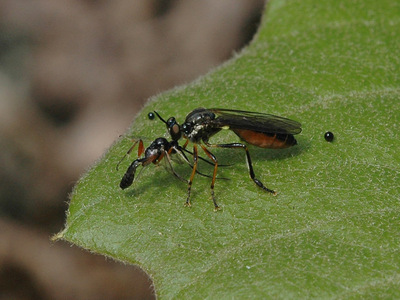