This species is found in a variety of habitats but it is the most likely Machimus in open grassy areas in central Wisconsin. All Machimus that I have identified from grassland habitats similar to Buena Vista or open areas at White River Marsh in Green Lake County have been this species. Nevertheless, I have found it along woodland edges so it isn’t just an open grassland species. The photos here represent Machimus sp. similar to M. paropus without the solid black hind tibia. None of my photos clearly show the characteristic stout bristles, some of which are black, underneath the femur of the front leg.

Hind femors not all black, no reddish spot near the base of the middle tibia, and bristles underneath the stout and with some of them black.

There are probably three Machimus species in Wisconsin that all are fairly similar and at least from photos it is difficult to see the necessary characteristics for identifying these three species. M. snowii and M. erythrocnemius could easily be misidentified as this species. I have yet to see M. snowii but it has an abundance of long white hairs below the front femurs while M. erythrocnemius has an extra reddish mark at the posterior base of the middle femur and bristles on the front femur an all white and not as stout as in paropus.

Uncommon. I have not seen more than two of this species (two times I have seen a mated pair) in a single day. 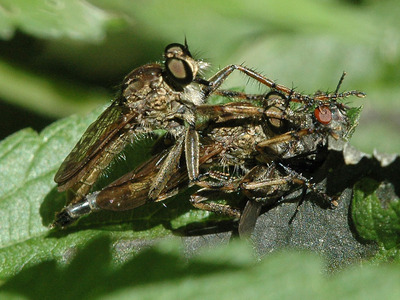 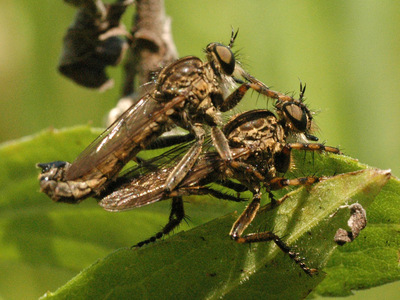 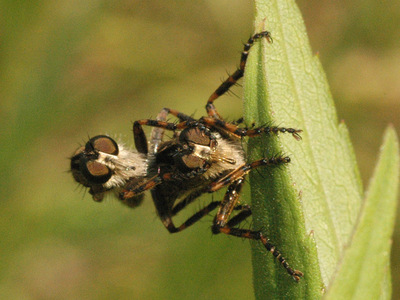