I have seen few individuals of this genus. This species does resemble Machimus in some respects but the bristles above the eye are strongly proclinate, that is, bent over at a nearly 90 degree angle and pointed forward. In addition the female ovipositor is very elongate and composed of five segments.

The fore and middle femurs are black on top with yellow underneath. A photo taken from above would be hard to use for identification since you can’t really see the yellow that is on the femurs below. The mystax is mainly black with some golden hairs.

Very similar to Neoitamus orphene which differs from this species by having the fore and middle femurs mainly black (the fore femur does have yellow at the apex). In addition, N. orphene has a golden mystax in the male as compared to the mostly black mystax of this species. 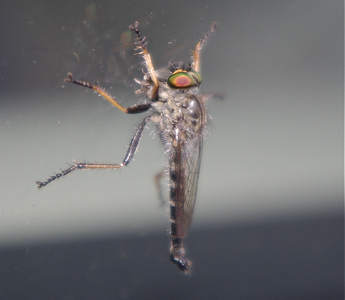 Along for a ride.