This species is one of the perchers that are found at the tips of short stems. This is not a very large fly, is usually seen low to the ground, and may be more common than it appears from the literature.

The antennae of this genus has plumose antennae, and although it is difficult to see in many photographs, it is diagnostic for Wisconsin. The femurs of the species are mostly black but with different, but distinct, patterns of orange/yellow on each leg. The tibias are mainly orange/yellow but all have some distinct black markings. These are just slightly over a half inch long and are often seen perching at the tops of stems.

This is our only species of Ommatius, and with the plumose antennae, sharp contrasting colors of the legs, and perching habit they are not likely to be confused with any other Wisconsin species.

Open meadows where it often perches on small twigs.

I have not been able to find any publication that said that this species was reported from Wisconsin previously to this report from Jeff Gruber. It has been reported through most of the eastern U.S. but Wisconsin seems to be at the fringes of its distribution. Jeff stated that he saw several of these flies on that day at the edge of the woods in savanna/grassland habitat. 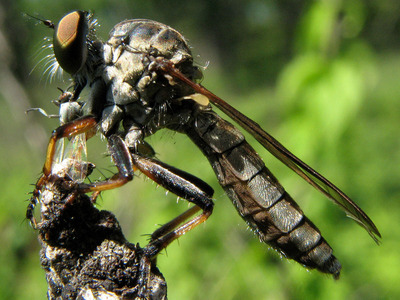 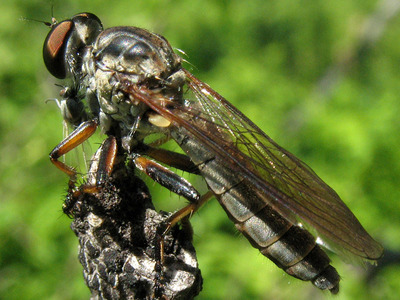